Stone Master Marathoners has donated £250 to Friends of Josh, a charity set up to remember local resident, Joshua Smith, who died last year following a period of acute depression. Always keen to support local community causes, the Stone running club presented the cheque for proceeds from their Westbridge 5 race to Josh’s mum, Sara Buckley. And, by way of further support, both Sara and her sister, Sandra, are now fully-fledged members of the Stone MM Bats: regular training sessions have proved a tonic to the family, improving their mental wellbeing and helping to deal with some of the emotion caused by Josh’s passing.

Westbridge 5 is a firm favourite on the local running scene, forming one of the North Staffs Road Runners Association series and also marking the start of the Stone Festival, attracting interest from local residents. This year the race held particular significance for friends and family of Josh, as the 5-mile event took place on what would have been his 28th birthday. Sara explained how a chance encounter with Stone MM on a canal towpath provided the inspiration she needed to motivate herself at a time when she felt weighed down with grief.

She says, “I have jogged in the past, though never with a club, and thought getting back into running might help with my mental health and grief following Josh’s death. I thought it would be good to combine this with charity fundraising to help motivate me. My sister Sandra, who has never run before (or ever wanted to!) said she would do this with me in Josh’s memory.”

Struggling to get going, the ladies bumped into Westbridge 5 Race Director Chris Barlow alongside the canal and he saw their determination and potential. Sara says, “Chris recognised that, though I was walking, I had running gear on and must have some intention of jogging. After chatting to him for a few minutes I had somehow told him all about Josh and agreed that me and Sandra would not only come down to the club on a Thursday but we would also run the Westbridge 5 a few weeks later!”

With much trepidation, they made their way to the Club’s beginner session, held every Thursday evening. And it wasn’t an easy step to make: “I was really nervous as I was finding it quite hard to go out at that time and the thought of seeing new people was terrifying. For Sandra, it was the thought of running and being last that was most scary.”

But run they did. They took heart from the support and encouragement shown by their fellow club mates and built up their confidence to a point they were ready to tackle the race. Sara comments, “The Westbridge 5 was on what would have been Joshua’s 28th birthday and this provided a really positive start to the day for us. Lots of family and friends supported us and some ran in the event too.”

“I still cannot believe how lucky we are to have found such a group of lovely and supportive people. Even though we mainly walked with a bit of running the Westbridge 5, it was a great event. Stone Master Marathoners, and particularly Chris, were fantastic in their support and encouragement of us (and all of the other runners) before, during and after the event. I had thought we would be really conscious of how slow were compared to everyone else but this wasn’t an issue.”

The Club is proud to contribute to such worthy local causes and recognises the importance of caring about our local community, regularly offering charity donations from race proceeds. Josh’s family have first-hand experience with the gap in provision and hope to make a difference locally wherever possible. Sara says, “Josh tried to get the mental health support he needed and deserved. In his memory, we want to try and raise awareness of the disparity between physical and mental health support, particularly in schools, and help to prevent suicide through setting up a local trust ‘Friends of Josh’.

“The really kind donation from SMM to ‘Friends of Josh’ will be used to help raise awareness and reduce stigma associated with poor mental health and to help prevent suicide locally. Jill Hood, Stone Town Counsellor, is supporting us with this. We’ve bought t-shirts, wristbands and leaflets from Papyrus Prevention of Young Suicide to build awareness. And we’ve organised the Papyrus HOPEWalk on Saturday 7th October to get our message out there.” 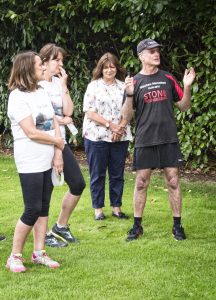 With its very own dedicated Mental Health Ambassador in place, it goes without saying that Stone Master Marathoners passionately advocates anybody struggling with their emotional wellbeing or just wanting to get fit to give running a try. The club has a rolling intake for beginners to start each Thursday evening – you don’t need any experience and will be guided and supported every step of the way. It’s certainly worked for Sara and could be just what you need. She remarked, “Joining the group has really helped me. The group are so positive, supportive and motivating. It gives me a few hours a week where I allow myself to switch off and have time to think of nothing but the running. The routes on club runs are all really scenic with the odd nettles, barbed wire, tree roots and electric fences(!!) for interest. I am amazed at the variety of runs and activities and events available and look forward to improving and taking part in some of these.”

For further details, visit www.stonemm.co.uk/beginners or pop along to a session, meeting 6.15pm at Stone Tennis Club for a 6.30pm start.