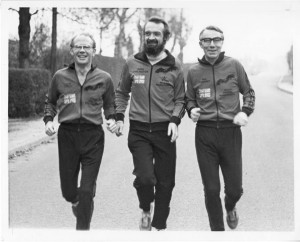 Back in the day, members must run one marathon and organise one social event per year. The name ‘Master’ refers to the club being formed as a veteran’s only club…men over 40 and women over 35.

The club was the first veteran running club in the country and attracted runners from far and wide both in the UK and internationally.

The club organised their first full Marathon in 1979, the Flying Fox Marathon, which predated the London and Potteries marathons.

Terry Darlington has written about the formation of our great club in his book “Narrow Dog to Wigan Pier” he has kindly explained how we were formed, our Latin motto, the bat and much more.

A tale from our founder on how our unique club was formed.

Many thanks to Terry Darlington – it explains a great deal about our characteristics which still live strong today!

It was after the Sunday run and The President, deep into his second pack of chocolate chip cookies, began to talk about the very early days.  The club members, exchanging glances, slipped away one by one, leaving him mumbling to himself in the dark room, while the rain pattered on the courts outside.

It all started with Stone Jogging Club in 1971.  Fred Wrigley as Captain handled the training and as Secretary I handled the organisation.

I introduced a few ideas which have lasted to this day – mustering, and relays, and the Stone Steeplechase and Dog Derby.  It was all very new then – on our third relay run, from the top of the Eiffel Tower, we were able to watch ourselves on television in a pub on the way home!

The Jogging club did not encourage racing and after running a marathon under 3 hours I felt it was time to move on.  On 26th November 1978 Bill Couldrey and Tom Chitty and I held the inaugural meeting of Stone Master Marathoners, a new club for veterans.  The objectives were to enter one marathon a year and hold one social event a year.

It was a sad time for me in some ways – I had a lot of friends in the Joggers and now I had in a way set up in opposition.  And there was no guarantee that we would succeed.  As one jogger said –look at the size of Stone – he doesn’t stand a chance!

In these early days the support of established athletes in the area was particularly important – George Kay, Don Shelley, Anita Griffiths and Terry Deighton come to mind.

With the help and ideas of these people behind us we tried to get as much publicity as possible.  Notably we started the Flying Fox Marathon in 1979, before London and before the Potteries marathon, and got it adopted as the national vet’s championship.  And we kept on selling – I recruited one member who shall be nameless (Roger Westhead) on a train, and another (Derek Palmer) in the Star.  Soon we had members in the US, Bahrain (Gerry Barnard), Scotland, and runners came from all over the country to train with us on a Sunday.  We had become a national club!

We started to do well in races, and the ladies in particular became famous – Celia, Elaine, Rita, Rose, sweeping all before them in alphabetical order.

On a Sunday it was not unusual for me to have an eighteen mile run, a few pints, and write the Sapientia in the afternoon.  Not surprisingly by the early eighties I found it advisable to concentrate a bit more on my business.  By that time we had fifty or so members and most of the management was in the safe hands of Dave Mason, Ivan Savage, Haddon Johnson and others.  Slowly as other clubs began to appear all over the country we became more local in membership.

The President had reached the end of the second pack of chocolate chip cookies.  A couple of members coming in late from the run saw him muttering to himself and fled through the side door.

Why, he maundered on, did SMM succeed in a little town?  It has got to come down to hard work in and out of committee and lots of dedication by athletes. And SMM has always believed and shown that anyone can be a sportsman, perhaps even a star.  If you want success, show people their strengths.

I think the mustering system is important as a way of encouraging people in training.  It has helped me a lot in the last few years and I am most grateful to you all.

With that the President looked at his watch, started, grabbed the third pack of chocolate chip cookies and lurched out of the door.  Langtry’s would be open any minute now.

Since we opened the club to youngsters there have been people around who can’t be a day over fifty and didn’t even fight in the war and know very little about the ancient folklore of the club.

One of the most important symbols of the club is the bat, Ernest.  Gather round children and Uncle Tel will tell you how Ernest came about.

In November 1978 I asked Bill Couldrey and Tom Chitty, who were training with me for the Boston Marathon, if they would be interested in forming a marathon club and we set about it together.  I knew that it was important to have a symbol.  I had used symbols before in societies I had started – the poetry society Plan B had a very smart Eskimo snow devil, Stone Jogging Club a  bare-thighed flightless running turkey called a bustard, and my firm Research Associates an exhausted parrot.  The parrot appeared only on running shirts and  turned into an owl when we put it on the letterhead.

I didn’t particularly want another bird and asked Bill Couldrey what he would suggest.  He said the symbol of his regiment had been a Flying Fox, the Borneo fruit bat and would that do.  I thought it was an awful idea partly because I had not thought of it myself, but said I would look into it.  It turned out that the Flying Fox, far from being a wretched squeaking thing the size of a butterfly, living off flies, was a noble creature, with a wingspan of five feet, which could fly up to forty miles to get its dinner.  It was so intelligent that it had been classed as a primate by some scientists, and it could make love upside down.

This was clearly a creature to be reckoned with, and when you thought about it the idea of a Flying Fox suited veteran athletes rather well.

I asked my friend the designer Bob Brooks to come up with an image and he produced the fine symbol we have to this day.

A year or two passed and I saw a promotion for London Zoo which said one could adopt a creature of one’s choice, including a fruit bat, and I decided this was too good a chance to miss.  Ivan Savage and Dave Mason went to London to fix it up.  I was away myself but I imagine there was a simple but moving ceremony.  There was certainly a brass plaque outside the big moonlight room where the bats lived, naming SMM as a benefactor.  We called the bat Ernest, after our oldest member, Ernest Dudley, who had joined the club some years earlier at the age of 73.

When we went to visit Ernest (the bat) he would be hanging upside down with a row of mates, and they would all look at us and poke each other in the ribs and twitter and giggle.  As I said, they are very intelligent and we wondered who was looking at who.

In the end we stopped paying for Ernest’s sponsorship because when we thought about it we didn’t like to see such a lovely creature confined.

One of my best memories ever was on ship near Borneo a few years ago seeing thousands upon thousands of fruit bats sweeping through the evening sky towards the mainland many miles away, in search of their dinner.  They were so powerful and relaxed in flight and it was truly an awesome sight.  I felt very grateful to Bill for his idea and very pleased about the choice we had made.

Finally, I was often asked by club members who visited Ernest in London Zoo – how do we know which is him.  Obvious, I would say, the one with the best set of credentials.

The setting sun was shining on The Rising Sun as the President settled back into the sofa in the tennis club, firmly grasping a pint pot in one hand and a lady club member in the other.  Today I will tell you, he said, the story of sapientia atque levitas.

We had a symbol and we needed a motto.  What about the Bible – they shall mount up with wings as eagles; they shall run, and not be weary (Isiah 40.31).  But this was asking a lot of the average member.  There was as a dog returneth to his vomit, so a fool returneth to his folly (Proverbs 26.11.)  More suitable in many ways, though a shade downbeat.

Maybe French – Ou sont les neiges d’antan (where are the snows of yesteryear) – rather sad for a vet’s club.

OK Latin – what about per ardua ad astra (through adversity to The Star)  But the RAF had got it first and astra was plural anyway.  In Virgil’s second Eclogue I found Quem fugis, a! demens (who are you running from, you mad bugger).

It looked as if we would have to make up our own motto.  I liked the idea of Latin because it is an international language and we were running overseas.  I sought inspiration in Ernest the Bat.

A fox is wise, or cunning, and a bat is light.  The Latin word for wisdom is sapientia and the word for lightness is the same as the word for levity or fun.  I liked the idea of wisdom combined with the ability to have fun.

The words fell together – sapientia et levitas.  Very nice, I thought, but a bit limp.  How about atque instead of et?  I think both words mean the same, but atque (pronounced at-cway) had more of a ring to it.  Sapientia atque levitas – now that sounds good.  The only trouble was I was not really sure what it meant.

I went up Airedale Road and hammered on the door of the head of Latin at Alleynes.  I think I had my red tracksuit on.  It must have been the first time in his life that he had ever been asked a practical question about Latin.  He was terrified.  Yes, he said, the Latin is OK, and yes, both words have more than one meaning.  Can it mean wisdom and lightness of heart, I asked.  Yes, yes he said.  Can it mean cunning and low body weight, I demanded.  Yes, yes, he said.  I think if I had asked does it mean please keep off the grass he would have agreed.

So there you are children.  That is what happened and now you know what to say when people ask you about the motto.  I don’t want any more of you bringing strangers up to me in races so that I can explain to them.  Below is all you need to make your very own translation – just mix and match.

Sometimes in the slow watches of the night I wonder if I made the right choice.  Qem fugis a! demens is very punchy and we could have had so much fun explaining it. 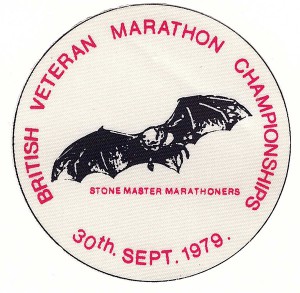 1993 Rita banks celebrated her 50th Birthday when she undertook the challenge of completing 52 marathons in a year and securing a world record which still stands.  She has also run over 200 marathons and run for England many times.