Once upon a time a small group of runners geared themselves up and stood on the little canal bridge by the Squash & Hockey Club in Market Drayton. It is 2004 and 110 runners took part. Stone ladies took 1st, 2nd and 3rd overall in the race, and these were Ros Barker, Rosemary Wilson, Pam Davies respectively. The race was then sponsored by Muller and organised by Tim Beckett. The Goodie bag was phenomenal with boxes of help yourself fleeces, sweatshirts and sports bags, not forgetting the famous yoghurts! Word soon spread and numbers rapidly increased. Due to cutbacks Muller decided they could no longer sponsor the event and in 2011, 6 weeks prior to the race pulled out. There was outrage and those who had already entered had to be refunded. Not to be deterred, and with local papers supporting the continuation of the race, Tim, myself (Richard), Jane Morris, the Town Crier and a few others got together to make sure the race went ahead, in the hope of providing an even better race. The Town traders came together and supported us. There were 1000 runners that year and despite Muller pulling out yoghurts were still provided. Other traders also provided goodie bag fodder. Yes it was another success, and because of the increasing numbers a new venue was provided and the course altered.

Tim and his team, have taken this race to new levels, with 2200 entered this year and voted ‘Best 10k in Country’ by Runners World for 2 consecutive years. They start organizing the event the week following the race, taking any adverse comments to heart in a bid for improvement. Lots of planning is needed, such as funding, sorting and allocating the 70 marshalls, putting road closures in place and car park arrangements. Park and Ride has been introduced in an effort to reduce traffic around the school. Then of course there is the sourcing of medals, goody bags and water. The local traders support this race generously with time and sponsorship. Besides the wicking Tshirts there are yoghurts, sausage rolls, pork pies, gingerbread men, mornflake oats, mars bars, sweets, medal, voucher for free pint real ale and much more. The day before the race there were 80 helpers filling the “goody bags” for the runners and it took us two hours to complete the task. The latest addition to the support of this race is Nuffield Health who this year organised the childrens races, provided free massage and a pre race work out. They also had a team racing. The Police work closely with the team regarding the road closures and the Army based at Tern Hill helped with the marshalling. Once again a town coming together to support its race of which they are rightly proud.

It is a great atmosphere on the day no matter what the weather. A number of childrens races start the day. Then the beat of music and an active warm up, provided by Nuffield Health, follow ready for the main event. There is a sea of runners but despite the large numbers the newly widened exit gate causes little delay. The course is relatively flat and PBs are in everbody’s sight and if it is your first race it is ideal. This year we ran down the main street of the town and shops were open and supporters lined the road. There was also a drumming band underneath the buttercross and the beat carried us on our way. Although the route goes through housing developments it is easy to run and well supported. The sting in the tail is at 5.5 miles when we pass the swimming baths and a short steep hill looms. It certainly tests the legs at this stage but does not go on for long and once again the drumming band will carry you forward. There is a long down hill to the Grove School in order to recover. A lap of the field is the final test but once again good support will carry you around.

When you finish this race if you are not pleased with your time you will be with your Goody Bag.

There is something for everybody at the Market Drayton 10k, spectators and children alike with plenty happening on the field. There are fast runners, slow runners, team runners, charity runners and plenty of fancy dress.

Well done to Tim and his support team and if you have not done this race yet it’s a great one to do.

The men’s winner this year was Tom Roberts of Meirionnydd Running Club in a time of 32:30 and the first lady who was 13th overall was Kim Fawke-Williams of Centurion Running Club in 35:13, both runners received £100 cash and other prizes.

We had 21 runners competing and 1st in for the club was Mick Downes in 39:11 (pb) other club runners also obtaining pbs were : Richard Fain, Paul Phillips, David Russell (12min pb), Alex Yendole, Anne Marie Mountford and Lisa Russell. If we have missed anyone, please accept our apologies.

Next year the race is on Sunday 10th May and will be titled Nuffield Health Market Drayton 10k. with a maximum of 2000 runners,so get your entries in ASAP. 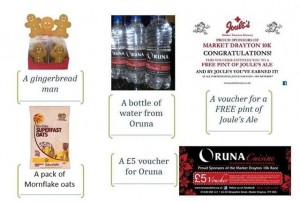 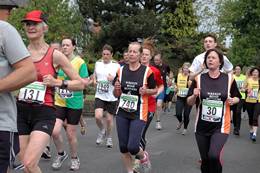 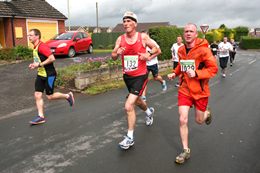 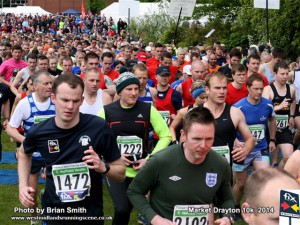