While writing this report on Sunday night, I suddenly realised why my back was aching and my legs felt so tired: old age and the fact that this is the thirtieth year I have been running, and then I had been running for 2 ¼ hours earlier that morning so I suppose I have to expect this sort of feeling at my age now. On the positive side, I have managed to run (not race) four races over the last six weeks which I have enjoyed with the people who persuaded me to take part. 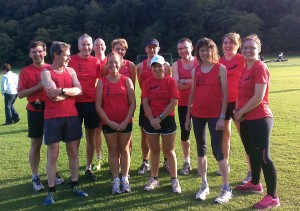 The weekend of December 7th I put myself up for the Weston Park 10k expecting it all to be on paths, but no – it was about half on paths and half over muddy tracks (do not listen to Dave Griffiths if he finds a race to run). Three members took part with Dave Griffiths 1st for the club in 58 minutes, followed by Anne Griffiths in 60 minutes and myself a few seconds behind. On the same day, Tim Hulse ran the Stockport 10 miles, a race that he does every year, with a time of 1:16:24.

The weekend after these races we had the last of the North Staffs cross country races at Leek Westwood High School – a tough course. In the ladies race, Alison Brind finished 1st lady for the club (28:49), closely followed by Claire MacKellar (30:12), and Emma Clay (32:49) just managed to hold off Ann-Marie Mountford (32:55). In the men’s race, two members ran with Alex Yendole running a time of 46:07 and Jonathan Howell with a time of 47:55.

On the night of Wednesday 17th December there was a reasonable turn out for the Chairman’s Bare Wrist run over four miles with Tom Johnson closest with his predicted time and with Alison Brind first for the ladies.

The last race of 2014 was Wheaton Aston 10k and four members took part: Dave Griffiths 58 mins, Anne Griffiths and myself 59 mins, and Sarah Capewell 68 mins – a PB by three minutes.

On Thursday 8th January, we had a special beginners group for new members with 29 first timers, 22 regular beginners and 10 club members which turned out to be very successful with two different group runs.  Following on from that night we are averaging about the same each week so far.

At the NSRRA awards at Florence Sports and Social there were trophies for Ann-Marie Mountford for first lady group W winner and the most improved runner and the Stuart Dunston trophy for the best performance by a group W runner at the Clayton 10k. Pam Davies was first lady veteran age group 60 – 64 and she now holds the association record for lady veteran 60 years for the marathon 4:01:48. Richard Fain came third in group D.

The last race I was going to report on was the Four Villages Half Marathon at Helsby in which seven of us travelled up to the Wirral, but this was called off at the last minute because of icy roads so we returned to Stone and did a ninety minute run around Barlaston Downs and the Outlanes.

Editor: The photo above is from the Oakamoor Vets from the summer –  I’m not convinced that many of the ladies are old enough to qualify as Vets.