Some of the last minute runs this year have been the most fun. The Dusk-til-Dawn was a kind invite to Tim and I a couple of weeks ago from Roger Taylor, who was already booked in with friends Linda and Tracey. 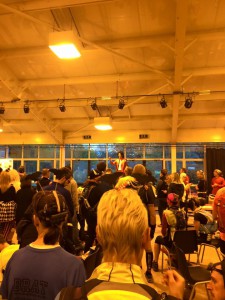 There were three distances to choose from: a half, marathon (our event) and 50-miler in loops around Buxton. The biggest concern pre-race was sourcing fancy dress kit. Tim turned in a great Dracula outfit with inflatable bat and lightshow, Roger did a grim reaper and I went with a bit of a ghoul mask.

The race briefing from a Thriller Michael Jackson at Buxton Community School was relaxed and the other runners very friendly. A festive grim reaper, complete with scythe was introduced, the deal being if they caught you, your race was over.

A sunset start was followed by a good climb out of town to Shining Tor and the moors beyond. Stars in a clear sky and peace in the middle of nowhere are part of what makes night-running so enjoyable. The other bit being the people you meet on the way…. like the guy from Portsmouth who had driven up during Saturday, was doing the 50 before a sleep in the car and return home drive. 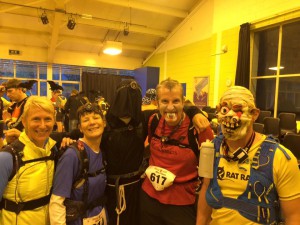 There were checkpoints every few miles, some of which gave food and drink (normally after a right good hill) and with the kit-checks before the event, I would recommend it as a good introduction to how ultras work. This was the first event where my GPS watch really delivered and it pretty much took us round the course like we were on rails. Those who know how bad I am at navigating will understand how big a deal it was to find this crutch; and Tim and I had a point to prove, having added 5m to a marathon in Baslow earlier in the year. The course was quite technical at times with at least one guy twisting his knee in a rabbit hole on a downhill.

We carried punch cards that needed marking every now and again – great spot by Tim at the first of these that I missed completely. The majority of the hills were in the first half of the run with some great trail-running before the return to town at the end. Over time, the half-marathoners turned off, then we did, leaving the 50-ers to complete their run within the 14hrs. There was a toughie hill that felt like it was half way around, the rest was fine. 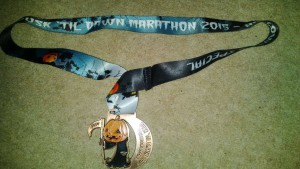 The final run-in to town was a giggle with revellers perplexed by runners blathered in mud and stinking of manure.

Back to the finish for nice cup of tea followed by a great morning watching the bats do well running and supporting at the Flying Fox. Ideal weekend.

Nice touch from the organisers was a message a couple of days later saying that they’d donated leftover food to a charity – proper feel-good event.