After feeling really disappointed with my performance at the potters Arf in June I made the decision to try and get myself in better condition and target the Manchester half for my target for the year of a sub 90min HM. Over the next couple of weeks Martin and Wayne had also signed up with the same target and the training started. I tried to train as consistently as I could with a couple of fast/hard sessions in the week and a decent long run on the weekend. Sometimes these were tough as I’d be running on my own but then I also got to run with some great runners, which make these tough sessions a lot easier when you’re all pushing each other.

All of a sudden results and performances started to improve, times that I thought would be out of reach were being achieved and everything seemed to be coming together. I knew I was running well but there was always this doubt in the back of my mind that I’d struggle to maintain the pace I wanted over the 13.1 miles, probably due to my disappointment at the potters Arf. Although at this point I knew that I’d rushed back from injury for that race and hadn’t done enough long runs in training.

In July I noticed a post from Lynda offering a Tissington trail place 2 weeks before Manchester. I thought this would be a good opportunity to get the speed and distance required and ease my worries about not being able to complete Manchester in my target time. As I completed Tissington in a time of 1hr 20.38 it helped in one sense that I knew I could do it but as few of you would of witnessed it completely confused me as to what was achievable and what I should be targeting. After a few conversations with various people I knew that I should just run as I always do, to go out hard and back myself and not have any regrets.

The night before the race I was nervous and knew I needed a good night sleep, which seemed to make it harder to sleep and resulted in me watching Die Hard until 2am and with my alarm set for 5am this wasn’t ideal. Surprisingly, I woke fine and went to pick Martin and Wayne up to travel up to Manchester. The chat in the car seemed to help and I started to look forward to the race, and even more so the planned food for after.

We arrived in plenty of time and walked to the Race village via the start line to familiarise ourselves with where we needed to be as it’s a 10 min walk from the race village back to the start. 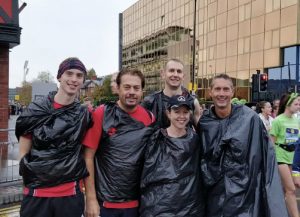 We knew it was going to rain and the previous day I had suggested to the lads that maybe we should take a bin bag to keep us dry and warm while we walked to the start but this ended in me being mocked by the pair of them so I decided to not bother, only to find that they both had brought bin bags, although luckily for me Wayne couldn’t decide between a standard size and a wheelie bin size so he had a spare. (He even shared a selfie of himself modelling them the previous night). On the way to the start we bumped into our fellow SMM runners Anna, Matthew and Michael and Chief Supporter for the day Caroline who decided a bin bag photo was needed and then off we went to the start pen. After a few of Emma’s now famous balloon warm ups we entered Start Pen ‘A’ Ready for the Manchester Half Marathon.

I made my way to near the front of the pen to try and get a decent start only to turn back and find that Martin and Wayne weren’t there and I couldn’t see them. It turns out they didn’t want to get too close to the front. I was joined by Jo and Vic which helped as because of their previous encounters with the streets of Manchester they were more nervous than me and so instead of worrying myself, I was trying to convince them both that they’d be fine. Just in front was Chris Morgan, Craig Taylor and a couple of other Newcastle runners which I hoped would work in my favour for pacing as I knew these guys are top runners and would be targeting a finish time similar to mine.

After a short delay ‘Bang’ the pistol went off and the race started, I set off at a quick pace and the miles soon started to go by and I felt ok. After a quick chat with Craig discussing targets I went past him and carried on back through the crowds who had gathered at the start, this is when I heard the first ‘Goarn Shaun’ from Caroline which always helps and always makes me smile. Everything was going fine up until about mile 7 when my stomach started to feel a bit ‘dodgy’ and this affected my concentration which then affected my running. I dug in and got dragged along by runners who were passing me, I knew that we joined the straight road back to the finish at around 11 miles so this was the primary target and then look towards the final 2 miles to the finish. 11 miles came and went and then before I knew it I was on the short final stretch with the finish in sight. I kicked on to try and grab as many extra seconds as I could and this is when I heard ‘Goarn Shaun’ for the second time which again made me smile although the photo shows it as more of a grimace as my calf was starting to cramp at the same time. 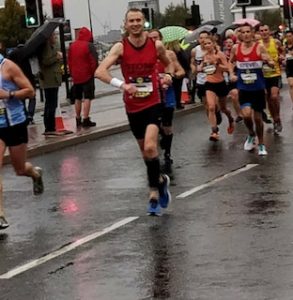 Finished…… as I crossed the line in a time of 1.22.20 (11 minutes faster than the previous year) I was greeted by Chris Morgan who had finished in a brilliant time of 1.20, my first thought was to see if Wayne or Martin were in sight. I got ushered round into the finish area to collect my medal and goody bag and then it was a case of waiting and hoping that they both finished in under 90 minutes. Within a few minutes I saw them both in the distance and I knew they’d come in within the target. Happy Days!!! Within a couple of minutes both Jo and Vic came through again both pleased with their times and confirmed what I had tried to tell them before that they’d be fine and both do well. I would of liked to hang on to see my sister and partner finish their first half marathons and all the other SMM runners finish but unfortunately by this point my stomach was in bits and we were all freezing so we headed off to the restaurant where Vic and Jo would meet us. Unfortunately the meal didn’t go to plan for me as I was struggling to eat but everyone else seemed to enjoy the food and a good chat which was good and I will look to do this again next year and hopefully be able to eat a bit more.

So Manchester Half Marathon is done, I appreciate some of you reading this would of ran multiple Half’s, Marathons and Ultras and maybe think ‘all this worry over a half’ but I always push myself and set myself high standards which then ultimately turns into more worrying and nerves hence why I was so disappointed with the Potters Arf, although my time wasn’t that bad. I definitely need to start listening to my own advice sometimes as I’ve tried to explain to a couple of friends, sometimes those nerves can be a good thing and you should try and embrace it. This is something I’ll be working on leading to up my first marathon next year. Finally I like to say a massive thank you to everyone who has encouraged me over the last few months, whether it be commenting on a run post or to those people who messaged me in the couple of days before Manchester. I can’t explain how much it has helped and kept me pushing towards my goals for the year and, to my wife who sent me a lovely text as I arrived in Manchester that brought a tear to my eye and again helped settle my nerves down.

Thank you all,
Shaun.