I entered Thunder Run with no idea what to expect. I thought that it would be a weekend full of running with some camping thrown in. I love camping and I love running. Seemed like a good idea to get my name down.
Run as many 10k laps as you can in 24 hours. How hard could it be?!
I started to wonder how many I would manage in one go. The furthest I’d ever ran was an unofficial half marathon. Could I do three? One after another…. I wasn’t sure I’d made the right decision to join in.
Roll on a few weeks. The teams were announced and I found out that Jo was my team captain in a team of 8. She explained that I wouldn’t have to run more than one at a time. It was a relay and I’d probably do three laps. Once the running order was put on our messenger thread I worked out that I’d be doing a run after lunch, one around midnight and another early morning. Didn’t sound too bad at all, except I’ve always been terrified of the dark. I imagined running through the woods alone with my head torch running out!

The Friday arrived. Our pitch had been secured by some amazing club members who rushed to the site early morning and taped off the area we would need for everyone to camp together.
I pitched my enormous tent and joined the rest to help out with the communal area where we would eat and generally hang out. We were constantly amazed by the amount of effort that was going into the SMM solo runners area. They had huge blow up beds, sound systems and fancy lights. It was obvious how much care was being taken over the crazy folks that would be doing lots more laps than me!
A friend kindly showed me the start/finish line so I understood how the wristband baton would be passed from one runner to the next. There’s a huge area set to one side that the relay teams run into to find their team mate. They then run onto the main 10k loop to start their run. All sounded pretty simple and I was starting to get more relaxed about the whole thing. 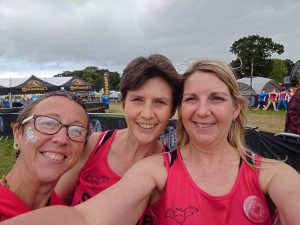 We had a walk around the stalls that were there. I wasn’t expecting to buy my first trail trainers but looking at the weather report I thought it wise to get me some. I managed to bag a knobbly pair at a great price so I was all set.
The evening rolled on with loads of fun and games at camp. We sat around with a few beers and even had a karaoke session with SMM’s resident guitar player David. I recall looking up the lyrics to ‘Totally devoted’ on Google, which I found the following morning! The kids had their faces painted by me as there was plenty of face paint and glitter to go around. Even some of the grown-ups had a go.

Race day arrived. I was a little nervous and struggled to eat much breakfast. Lots of folks encouraged me to eat and explained that fuelling up would be really important. We went to the start line and cheered everyone as they started off at bang on midday. It was so exciting. The atmosphere had a real buzz about it. I’d never experienced anything like it. The races I’ve done before somehow didn’t have the same feel. I knew it was something special to be a part of.
I headed back into camp where the race route by our communal area had been turned into a cheerleading area. There were red pom poms everywhere! 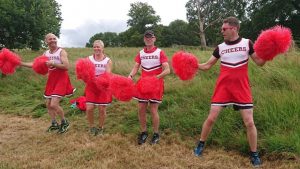 The menfolk wore the cheerleading dresses and there we stood for a couple of hours jumping up and down as all the runners passed through. Runners of all abilities and pace passed us by which made me feel more confident about my lap that was coming up.

Finally it was my turn to get changed and go up to the start line. I would be waiting for Jo to pass me the baton/wristband. I saw her coming towards me and my heart rate leaped. She slapped the wristband on to me and I made my way through the waiting area onto the race route. I tried not to get too excited with my pace as I knew from the other runners that the route wound its way through the trees and on terrain that I hadn’t really trained for.
It didn’t seem so bad for the first mile. A few little hills but nothing too serious. And then at around mile 2 the heavens opened. It wasn’t just a little bit of drizzle either. I’ve never run in rain like that before, ever. Even through the thick of the tree canopy it came down. The mud got thicker and thicker. I shouted at one point, “Give me a break!!” at the sky, like that was going to help! The rain ran down my face and I was struggling to see properly. I’m really not exaggerating here. It was nothing like I’ve seen before. I wanted the downhills to feel good so I could make up some time, but I was unsure of my footing on the slippy grass. Running through the camp lifted my spirits no end. All of the club camping had been set out along the route so people were standing in the rain shouting encouragement. Runners who passed me said how well we were doing, and so I did the same to the runners I passed. 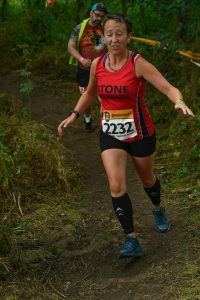 Seeing the Stone part of the track coming in to view I felt a huge sense of elation. The cheerleaders were there jumping up and down with pom poms. Not far now. The finish line came into view and I looked for my teammate to pass the wristband too. I told him that the course had slowly turned into thick chocolate type mud and to be careful.
That’s it. My first lap done. Proud? Who me?!

My next run wasn’t until around 11.30pm so I got dry and made myself busy with the cheerleaders. I realised how important the support had been to me whilst I was running so I stepped up and shook pom poms in the rain for every single runner who passed by.
Preparing for the night run involved me panicking over the dark and trying to work out how to wear my new chest light! I made my way to the start and off we went again. This loop was much harder. People were sliding on the mud everywhere. I tried to run as much as I could but it was so hard. I walked some of the route right on the edge of the path where there wasn’t as much mud! It definitely took my mind off the fact that it was in the middle of the night. I wasn’t alone at any point. There were runners all around. Little torch lights all through the woods bobbing about like stars. When I got to 13.5 miles into my runs I let everyone know by shouting at the top of my voice, “This is the furthest I have ever run!!”. It was the best feeling to have lots of nearby runners whooping and cheering! The finish line came into view where I found my teammate still dressed in his cheerleader dress. Off he went and I was done.
Then I was ready for bed. Someone would wake me up in plenty of time for my next 10k, around 5am.

“Sara. Sara. SARA! It’s 5 o’clock. Time to get up”
And I was off again. The sunrise had been lovely. The rain had stopped. Time for some breakfast. I’m not much of a breakfast eater. I was encouraged to get some porridge down with a cup of tea. Bleugh, but so needed!
I waited in the start area for a while until Jo arrived. Then I was off for my final run. I was going to enjoy this one. I made it more about finishing and less about getting a good time. I actually didn’t feel too bad at all. I made sure that I gave lots of support out on this run. I’d heard how tough it was for the solo runners after running through the night. I made sure that I gave out lots of compliments to anyone I passed. I couldn’t believe how they were all still going. It had been really hard going during the night with the mud and the rain. Legends. Every single one!
The finish line came into view so I gave it a little sprint before wishing my team mate a cheery goodbye. My last lap done.
Heading back to camp I chatted to other runners who had finished their last laps too. Runners from all over the country with one goal. Doing their best. Solos, teams of three, five or more. The camaraderie really was something else. I felt great going back to the cheerleading area again. I threw on a jumper and grabbed the megaphone. I was making sure that everyone got some great support out there. I shouted some really daft stuff. The hopscotch that was drawn on the floor in front of us all was a huge highlight. Most of the solo runners even attempted it after running loads of loops through the night. Amazing! Some runners were, “Too fast for hopscotch” which quickly became one of my catchphrases for the weekend! 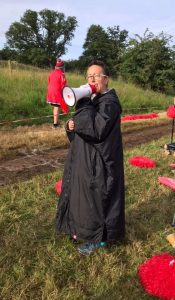 “Top job”
“Here comes naked guy again”
“I’ve got a t-shirt like that”, when seeing the bright yellow TR t-shirts that we all got with our medal!
I was having such a laugh. The SMM cheerleaders will be forever etched on my memory!

I was so proud to see so many podium finishers from our club. Everyone did so well. No matter what size our team or what time we did our laps in, everyone felt included.
I can’t wait until next year. Maybe I have a few more laps in me. I’m hoping there won’t be as much rain though. Maybe I should do some training runs in wellies to prepare. Although I’m not sure anything can prepare you for Thunder Run with our club!