Stone Master Marathoners decided to send a contingency of brave old farts to compete in the 45-55yr category following a certain amount of coercion from our very own master runner, Ben Gamble esq, an elite runner, coach and sports therapist (who happens to be rubbish at crazy golf, but that’ll have to wait until another time).

Bryn Holmes, Robin Williamson, myself and Paul Glover (the youngster of the pack) travelled to the event with an ensemble of Bat goddesses for support. Thank you wifey, Amy and Aggi, although it later came very apparent that, support aside, all three of them couldn’t wait to get their hands on Robin’s Haribos.

The venue was straight forward to find, a godsend for someone like me, and once parked we collected our race numbers (chipped) and confirmed our running order. Bryn, who had run the route before very kindly took us around on a recce, along with muttering and chuntering from us, the uninitiated. The route is definitely not flat and the conditions were somewhat windy. It was however dry and bright.

Bryn had the unenviable task of running first and, unbeknown to him at the time, found himself surrounded by a younger age category. When the race began, these youngsters disappeared into the distance which must have been pretty soul destroying for Bryn, but he did an admirable job and completed his leg, albeit rather pink and sweaty, ready for Robin to take over. 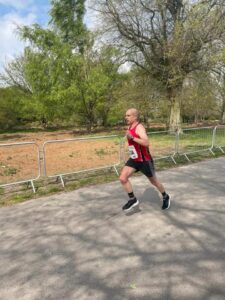 We all found this event really well organised, especially at the point of change over. The change over runners were corralled in a holding pen and then as teammates approached were beckoned to the start line. No need to keep on checking behind as marshals were on hand to perform this job and signalled us when to start. This all worked very smoothly and professionally.
So, Robin was next to run and also finished pink and sweaty (to be fair we all did). 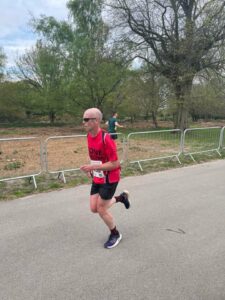 I was next and as said early, found the changeover uneventful. Definitely a picturesque route but strange as runners were sharing the park path with families and ramblers eating ice cream as we were gasping for breath and eating our lungs. They certainly didn’t get in the way though and some even managed sympathetic smiles. Last 100 metres uphill with loads of encouragement from our screaming banshee support team, lovely to hear if not a little scary ( I know you can’t help it Amy, its just the way you’re designed) 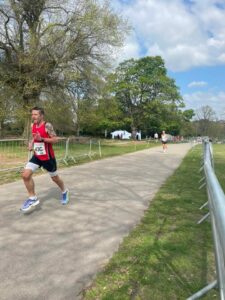 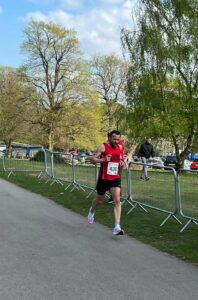 Paul and I compared trainers whist Robin and Bryn disappeared and then came back eating burgers, replenishing carbs (there seemed an awful lot of that going on actually, even amongst the non runners, just ask Aggi)

I think all of us would happily do this again and I would certainly urge anyone reading this to seriously consider doing it and represent SMM. It’s a great event.

Please note there has been considerable editing to create a report so as not to offend, and to make sure the higher echelons of the Bat Firm don’t censure me. I know it’s inevitable, but I’ve managed to dodge that bullet so far.
Previous versions may, sometime in the future, appear in the public domain but definitely not on this website