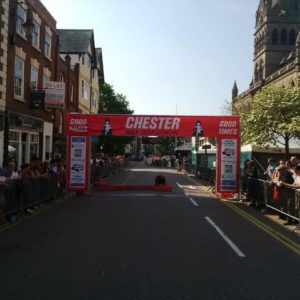 What a hot day – the hottest this year (???) and of course the Sizzling Chester Half Marathon.

Three Crazy Ladies decided to forgo a shopping expedition at Cheshire Oaks and head straight over to the Racecourse at Chester for a ‘run in the sun’. ‘It was a hard decision’, commented one of our ladies, ‘but I just haven’t got enough room in my wardrobe for another Mulberry handbag’.

The temperature reached a mean 24 degrees C, and the turnout was huge.

For the first 6 miles out of Chester the breeze was behind our runners making the pace steady. Water stations were well equipped; ‘…..half down the throat and half down the back…’ was the best way to facilitate the water, states Julie (Ebrey).

Joyce had a super run considering the heat. We put it down to her acclimatising overseas. Well she certainly does enjoy her holidays and they do certainly pay off on days like this. Fortunately she had left her straw donkey at home.

Heading back from mile 6, as the roads meandered around some beautiful country side the breeze started to cool things down; only marginally. There was evidence of some hot bodies not being able to make it much past the 8 mile marker.

Libby was a ‘first timer’, yes it was her first Half Marathon and the furthest she had ever ran. As all first timers her anxiety levels were high in the pen. She had a fabulous run and kept pace with Joyce much of the way.

The last 4 miles saw some mean casualties. An ambulance whizzed past and a few were taking refuge under the bushes in the shade; even one collapsing in the middle of the road – out cold!

The finishing line was in the centre of Chester with our runners passing below the famous clock tower. ‘It was such a buzz running through the crowds all cheering me on and shouting my name’, comments Joyce who came 4th in her Category.

Libby was overwhelmed when she finished and wiping a tear from her eye managed to utter the words, ‘I cannot believe that I have just ran a Half Marathon. I feel so emotional’.

The Goody Bag contained some nice things; but the t-shirt took the prize with its ‘I BEAT THE CLOCK’ logo and our SMM red. A great addition to any runners wardrobe.

A great turnout from the North West of England and good that we had some ‘Bats’ swooping in on the event. 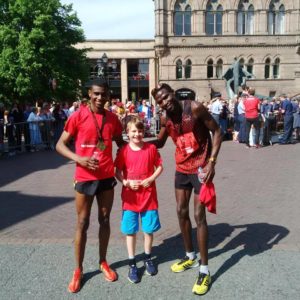