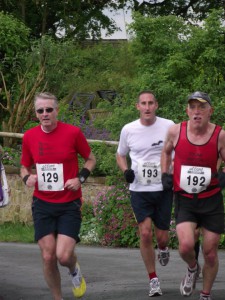 When Bernie first mentioned his idea to bring back the FF marathon, on a European trip of culture, we were all in favour after a couple of drinks. Rather than run up and down the A34 through Stone, he came up with the Knighton route to avoid road crossings and take in the scenery. Unfortunately, this also involved a few hills, as we discovered when we cycled the route over a year ago. I wasn’t too concerned about this at the time as I intended to marshal rather than plod around the lanes.

The Flying Fox would be my 31st marathon since London back in 2007. Prior to this, I always considered 13 miles to be far enough and never contemplated a marathon. I believe my mistake was joining Bernie on the long Sunday runs after gaining a place in the London marathon. Before I knew it, I’d entered 4 marathons, several LDWA events and started to run in excess of 50 miles per week. After a few reasonable marathon times it all stated to go downhill, as Bernie promised it would once I hit the big 40. This clearly demonstrates that we should all listen to his advice.

Knighton felt very miserable on race day as I stood wearing my bin bag in the car park field with wet feet. Luckily, the rain passed before the start and Tim, Steve and I who had decided to run together, began chasing down Kevin and Claire in perfect running weather. Having the support of our fellow SMM runners at the marshal points and drink stations made a huge difference to the marathon experience and helped to keep us going on the hills which were in abundance.
After a couple of miles the topic of conversation had moved to our finishing strategy. Steve decided that he was intending a sprint finish, whilst Tim and I said we’d settle for anything as long as we finished. We’d agreed an 8 min mile pace before the race, which seemed a bit optimistic on such a hilly course. By the time we caught up with Kevin and Claire at 5 miles we’d been averaging 7:45 min miles. I knew this pace wasn’t sustainable and I’d pay in the later stages.

The climbs to High Offley at 6 miles, Garmelow at 8m and Bishops Offley at the half way point did nothing to conserve energy. A long straight couple of miles to Bernie’s house in Fairoak served as welcome break from the hills and a nice cup of tea from Rose. I daren’t tell her that I threw most of it away as it was too hot to run with! Steve pulled up lame at this point and walked to the physio table at the finish as Tim and Kevin disappeared into the distance.
It was a further 3 miles to the 19m point in Doley where I realised how tired my legs felt. This is where I began to regret the early pace and get ready for that all too familiar feeling of painful legs and knees that don’t want to bend. At around 22m in Cheswadine, I was counting down the miles as Charlie Rowlands sped past, heading for a pb as I attempted to jump a puddle but failed miserably.

I spent the final 4 miles counting the number of times one running shoe clipped the other as I hobbled between marshal points and water stations, before a quick pause for breath and final sprint finish across the field to the finish and a celebratory pint of lager.

Congratulations to Kevin for winning his age group in a great time and Tim for his return to marathon running. Thanks to Bernie and all the other bats for making it such an enjoyable day for all. 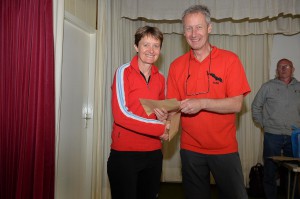 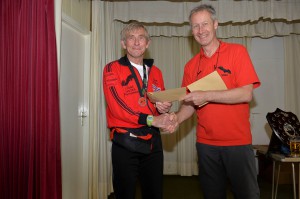