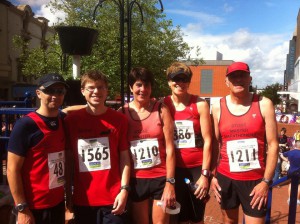 Saturday afternoon I spent my afternoon under the duvet watching movies with my daughter resting up for the Potters Arf the next day, it was a stormy, cool day and much the same was predicted for the Sunday. Normally I would get my clothes out the night before a race but I decided to see what the weather was going to be like before choosing between vest top or t-shirt. The alarm went off at 7am for pre-race porridge and I could see the blue skies through the edge of the curtains – bugger it was going to be a hot one.

I arrived far too early for the race but was glad to see that Paul Phillips had my plan too so we stood and chatted. The crowd had started to build outside the Potteries Shopping Centre, lots of green Trentham t-shirts gathered together but where were all the bats? We were supposed to be gathering for a pre-race photo and only just managed to get one in (although not everyone running was present) before we began ‘the walk’ to the start. As usual you were greeted to the sight of hundreds of men taking a last minute leak under the bridge! It seemed busier than ever and the start was a very slow one indeed. It was my aim to get under the 2 hour mark and nothing was going to stop me today, well apart from the bottleneck somewhere near Boots which meant a short period of walking (god I was livid!), then we were through and over the finish line with the usual comments from newbies like “that was a quick race” or “finished already” ha bloody ha, I wished that it was as was certain that I’d blown it already. The old me would have given up but 2014 is the birth of the new mentally focused Anne-Marie and this little blip wouldn’t beat me.

The next few miles seemed to pass quite quickly, blink and I was already passing Bryan Dale at his usual spot on Victoria Road. It was heating up and I was wishing for a drink’s station. The traffic started to build but this is what I really like about the Potters Arf, the people whether on the pavements or in stationary cars are so wonderfully supportive. Come rain or shine they’re out with ice pops, jelly babies, one guy even managed to support dressed in a sheepskin dressing gown (yes I swear ask Steve Alder who saw it too) and pj’s clutching a beer can. How I wished I’d entered the relay as we turned into King Street.

The next few miles were tough, undulating yet lined with support. I didn’t see any club members en route but did pass fellow NSRRA Group W members so I was pleased and aimed to win my group for the fourth time. I heard my name shouted in Longton and saw Nicky Downes and children but no usual support from Bernie and fellow pint drinkers. Mike Keeling was there with family taking action photos. The drag up Anchor Road was bearable thinking that I would reward myself with an ice pop at the top but where were those ladies?? I generally know where I am up until this point but once we turn right up through Bentilee I haven’t got a clue until we pop out onto Leek Road at which point you really feel that you’re on the homeward straight. What can I say about the next 4 miles, they’re undulating or tough, no sugar coating it your legs are tired and you’ve got some big climbs to do.

Now then Heartbreak Hill, always good for a good hosepipe or two. For some reason it doesn’t matter how tired I am by this point I will not walk up this hill, I haven’t let it beat me yet but it does mean that by the peak there’s nothing left in the tank. Bill was at the bottom of Town Road and without him shouting at me and running up the pavement I think that I would have thrown in the towel and walked but to be honest I was too frightened to stop and this is what I needed. I’d got 4 minutes to get under the 2 hour mark and I wasn’t wasting 1 hour 56 minutes to mess it up at the end so I gritted my teeth and somehow managed to do my quickest mile at the end, however as I neared the clock I saw that I’d passed the 2 hour mark by seconds – bugger again! I knew that my chip time would be under 2 hours so sprinted the last bit and yes thank god I was over the finish line. It was then queue time for the goodies. Thank you to the lady who was very sensibly packing the plates in people’s bags rather than make the market square look like the fallout from a Greek wedding.

Pam was the only bat that I saw so I made my way over to her from a post race chat. Mac then joined us. The general consensus was that it was a tough race made harder by the tropical conditions but would we do it again, yes probably.