George was a long-time member of Stone Master Marathoners, was much respected and an inspiration to all runners.
The popularity and quality of running in North Staffordshire was largely due to George. He was dedicated to the NSRRA being not only secretary, race organiser and editor but also the single handed organiser of many races including Bathpool 5, Stafford 20, Tittensor 10 and Eccleshall 15. 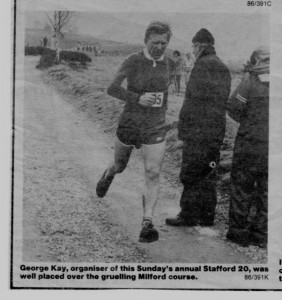 He ran over a 100 marathons (his first 100 he achieved an average time 2.42 with a best of 2.32). He ran Ultra events and participated in many of the events organised by the Long Distance Walker (LDWA). I remember the only time we beat George was on the Anglezarke . George had taken the wrong turning but was adamant that the organisers had changed the route!

I shall mainly remember George as an inspiration. I shall remember him mustering to the back to encourage the improvers. He would then wind up the pace so we would be breathless in a short while.
George was totally committed to running and has left this world a better place.