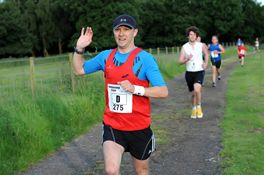 For some strange reason I decided that on Wednesday 11th June I would ride to work on my clapped out bike If I am going to convince the wife I need a new bike I better ride the one I have owned for 20 years more than the 3 times in 11 years of marriage (no puns about bike or ride please!!).

So a gentle 9 mile ride to work was easy enough so why not ride home as well – Stafford to Stone is all downhill after all and you are using different muscles to running so it won’t affect me for a two mile sprint.
Well arrived home, breathing easy – check, legs not wobbly – check, back ok – check, bum cheeks – bugger they hurt ! Ok, ibruprofen, glass of water and get changed to set off to Shugborough.

Arrive at Shugborough about 6.15pm ready for a 7pm start and as always (as witnessed by Anne-Marie at Potters) I am too early, 7.30pm start! Fortunately the sun is shining and lots of people had the same idea so I strolled to the bank to find my allies in red shirts. A few of us were milling around and slowly the numbers increased and then more turned up, what a turn out we were almost matching the green of Trentham.

Alison and Bill had brilliantly got 8 teams together, I was going to go through and name everyone at this point as when Tim Hulse volunteered me to do the report they wanted about 2000 words or several sides of A4, however I can ramble like JK Rowling so editing is more likely the problem.

About 7pm everyone had sorted their numbers and understood roughly what was going down so we arranged for a group photo, a couple of people had gone for pit stops but nonetheless a decent number of us smiled for the camera and don’t be surprised to see us as a cover photo on a fashion magazine soon. 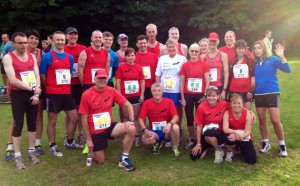 Ok, talking over, pit stops sorted, it was time for the Letter A’s to make their way down to the start for the mad rush. At this point the banter started, ‘The Young Pups’, early favourites for the quickest time for the club and ‘The Z Team’, their nearest challengers (and my team) started the mind games – Mick Downes was up against Mike Keeling and you could see the fear in Mick Downes’s eyes as he lined up before the gun, however that soon disappeared as he shot off in a cloud of dust!

Once the crowd had disappeared over the first ridge things start to settle down and most people wander over to the corner to wait for the first runners coming into the field and after only 6 minutes or so budding Mo Farah’s speed into the field running faster than I rode to work (not overly difficult but heh). As expected Mick Downes appears for the club first with Mike Keeling not too far behind and they clock very quick times with Paul Lee and Anne-Marie picking up the baton.

I was running the last leg ‘D’ for ‘The Z Team’ so I stood on the corner cheering all the Bats through, every one of our Letter A’s were through and finished in under 20 minutes, so I eagerly awaited Anne-Marie to have overtaken Paul somewhere in the woods and appear next.

Damn, he was still in front and running very quick, I thought I would try some mind games and when he ran back past me for the final stretch I shouted ‘Well done Anne-Marie your catching him’, however at this point she came round the corner blatantly blowing my tactics into oblivion…d’oh!!

Paul passed over to Tim and Anne Marie passed over to Pam with their lead pretty much safe so I continued to cheer on the rest of the teams (and others of course – I never realised how friendly runners are, we cheer the superfast and the super slow with equal enthusiasm, it makes every event great fun.)

At this point the ones who have finished their legs are gathering at point to cheer others on so I wait for Pam to appear in the field before strolling over to the start pen, Richard Fain has disappeared into the distance so unless he walks I think I may struggle to catch him. Pam enters the final straight and I prepare, feeling good, to set off and speed round in record time.

Bang….why are my legs so heavy, my mind is running but the body is saying slow down, surely a little bike ride had no effect, it’s a struggle but I chug along up the road and into the woods. It always takes me a couple of miles to get going so 2 mile relay probably not the best without properly warming up but I meander along with the plan of kicking in with some speed at any time. A couple of young kids go past, then a couple more and before I know it I am running onto the field and just warming up.

Right, time to push on, round the edge of the field slowly reeling in people and especially those kids, down the diagonal and ask the Bats for some encouragement which they duly oblige and passing a few people now. Final stretch, pump those arms passing a couple more people and round the last bend….not that I am competitive but that kid slowed down and I beat them…yes!

Thirty seconds faster than last year with ‘bike legs’, next year no bike riding and a warm up and we may catch those ‘Young Pups’.

Glad my leg is over so I wander over to other Bats thank them for the cheering and cheer on others coming round the field.

Most people have finished now and are comparing times back at the hill, it was an excellent turn out for the club and it is a great event with hundreds of teams taking part. Some continuing the night with a BBQ, others disappearing off for a pint and others just drifting off.

I shout my goodbyes and wander back to the car wearing the Bat proudly and really enjoying the buzz going round the team. Bring on Stone St Michael’s 10K and come on you Bats!!