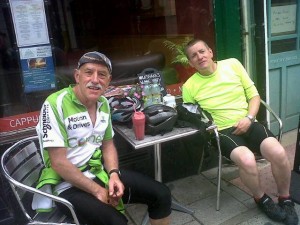 Seven members of the club decided to run this event, with Steve Parker and Tom Johnson cycling there as the advance party. Fabien, Bernie, Mac, Jim and myself departed from the club on Friday 13th June heading for Portsmouth for our ferry crossing to France. The crossing was as smooth as can be, and included plenty to eat and drink to get the party started. Bernie decided once we got back in the car, to show us his dance moves to some music that only his generation would remember! 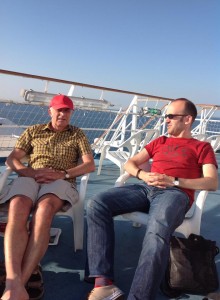 On the Saturday morning we went to register and stayed the night in a hotel close to the finish.  We met up with the mad cyclists and topped up our carb levels for the next day.  A ladies only event similar to race for life was taking place much to the delight of the men……plenty of Lycra to ogle at.

It was an early start on the Sunday morning to catch a bus to the start line.  There seemed to be loads of people, then we realised they were running the half, not the full marathon.  We went to our collection point and I was horrified to see only two buses, but there were obviously more to follow.  We promptly made our way to the back seats where we chatted to several other English people.  Upon arrival at the start, we immediately descended on a cafe for an hour in true English style.  Then it was time to drop off our bags and get warmed up for the start. 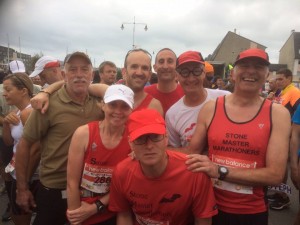 We were cold standing round but we soon got warmed up, even in the headwind along the coastal roads.

The route itself was lovely, mainly flat, lots of support and regular hydration stations including fresh and dried fruit, and every so often were wet sponges, much needed by Mac! There were bands playing along the course which were really good and kept everyone going.

After the coastal roads we headed inland and past the Pegasus bridge, through villages and towns and past fields.  By now there were signs directing both the full and half marathons, and soon to be joined by the 10k signs.  It was a proper festival of events.

I was a bit downhearted when I saw what I thought was the new balance finish sign, but it was just there for advertising purposes! By now the crowd was really noisy and shouted encouragement (I think, as if speak no French!) and got me to the end.  Straight after crossing the line I had a microphone shoved in my face and an attempt at an interview – it was very short! 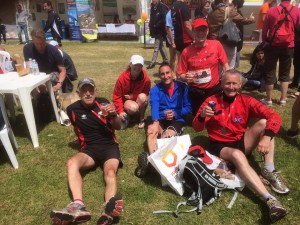 At the end there were loads of stalls with local food and drink as sampled by Bernie, leading into an area of marquees with bars etc.  The baggage tent staff were extremely efficient and it wasn’t long before the seven of us were reunited.

A couple of us cramped up which provided much amusement for the others, and poor Steve had worked a tad too hard and suffered for it.  On route to the medical tent he was put in a wheelchair, then tipped straight back out!  After about 20 minutes he was back to normal.  We all showered and donned our new t-shirts and medals.  Steve by now was feeling so much better that he decided to go for another bike ride to meet us all back at the flat. Tom was slightly more sensible and got a cab!  We had dinner, then the celebrations really started.  Fabien was 40 on the Saturday, so it would have been rude not to!

Being a lightweight, I went to bed quite early but spent a couple of hours laughing at what was going on.  I see some people in a different light now!

On Monday morning there were a couple of hangovers and a few aching limbs.  Steve went off for a bike ride with Tom, and the rest of us went to bayeux to see the tapestry, went to the beaches and drove along some of the marathon route.

We had an early start for the trip back on Tuesday. Although still a smooth crossing, I felt rather green and was glad to see dry land.

It was a fab weekend and I would recommend the event to anyone.  It was a great course and was very well organised.  It was my first trip abroad to run and the company made it one to remember.  Cheers guys. 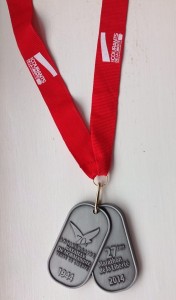