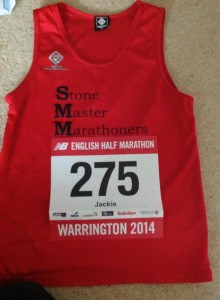 I arrived early with my friend to a misty field for what was going to be our first half marathons since spring.  When we entered we didn’t realise it would be a 9am start. The English Half Marathon forms the main part of a festival of running.  We were told that this year, the number of runners throughout the festival has doubled. 2700 took part in the half this time.

The start was along a small tree lined avenue close to the Victoria athletics park.  Pace runners were out in force and there were quite a few runners on their maiden voyages as the race is described by the organisers as flat.  It wasn’t totally flat as there were some slight inclines, but long enough to be glad to get to the top of. The main field was set out as a village with baggage, registration, stage and stalls.  There were a lot of families there making the most of the lovely sunny day.

The start itself was a bit of an anti-climax, because with five minutes to go we were told there would be a delay of 15 minutes.  This announcement took place during a warm up routine that a very loud scouse lady was bullying us to take part in.  Unfortunately that meant she came back and had another go!

The 10k runners and half marathon runners all set off together – at about two miles in this became a bit of a problem as the narrow country lane we were were running on couldn’t accommodate us all.  At about three miles we split however, and there became more room for everybody. It felt like most if the first five miles were uphill, although gradual, but we ran through some lovely villages and countryside.  We had a lot of support along the route, and there were medical staff at each water station.  It did feel very well organised.

My favourite part of the race was from about seven miles in where we left the roads for a while and took some gravel paths through park land.  The trees gave us some shelter from the now very warm sunshine.  We really were very lucky with the weather. This continued until about mile nine then we were re-tracing our steps back to the start/finish area.  This also meant that it was mainly flat and downhill, with the exception of the bridge over the river at 11 miles.  I felt tired here but it was only a short climb until the next downhill section.

The last two miles were quite quick.  Some runners around me clearly hadn’t read the pack we downloaded with instructions for the day, as they thought the finish was where the start was.  We had to go through that and three quarters of the way around the athletics track.  This meant that I could overtake some runners that had burnt themselves out too early.  That said, I didn’t have enough left in the tank to increase my speed by much on the track.  Some sprinted straight past me leaving me for dust, but I like to think I gave more over the whole event! That’s my argument and I’m sticking to it!

The finish line was on the track and we were immediately given our medals and some water. We then went through to a gated off area to collect our other goodies – gel, banana, cereal bar, haribo sweets, crisps, t-shirt and socks.  The only problem with this was that as there weren’t any bags to put them in, it caused a bit of a queue.
Baggage collection went very smoothly, then with tea in hand I waited for my friend to come in.  There was ample parking on-site, but I would recommend getting there early and parking at the environment agency which was a five minute walk away, and easier to leave from at the end.

All in all, I would recommend it and people with young families should also consider it.  My only recommendation to the organisers would be not to get any bigger unless the 10k runners start after the half runners.I think it would be possible to get a PB – I missed out by about 30 seconds.