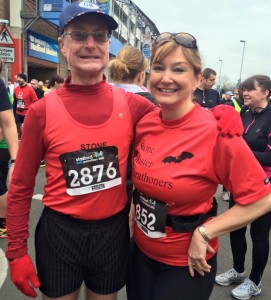 The morning of Sunday, 22 March for Stafford half marathon turned out to be perfect running conditions 8° partly cloudy with a fantastic representation from Stone Master Marathoners! There was over 3,000 participants and 500 for the fun run. We had twenty seven representatives from the club, this included members from the beginners group who were participating in their first half marathon to veteran runners of our club including the legend that is Chris Barlow! 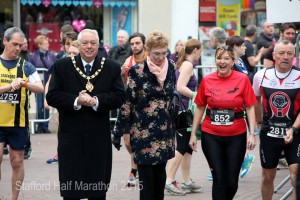 The deputy mayor of Stafford Councillor Thomas A Holmes started the race with the countdown at 10 o’clock and we set off – the advice from Bill Clarke was – don’t go off too fast! The course took a new route for 2015 due to the major work carried out by seven Trent Water causing a road closure between Weeping Cross and Milford Common and as such produced many personal best’s from the club. The route took us out on the Newport Road up through Highfields, back along The Wolverhampton Road, up Radford bank to Rising Brook then a long stretch along Beaconside back to pick up the old route into Stafford. The extremely well organised, well marshalled race included water stations in abundance every 3 miles & even offers of free wine but unfortunately no cider! There was massive support from the local community with offers of jelly babies, drumming bands and very loud motivational music. 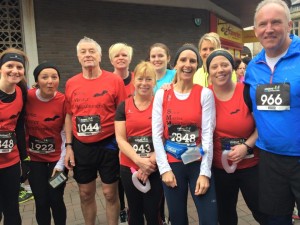 At the finish you could receive a very welcome free sports massage by students from Staffordshire University for acing calves and collect the bright yellow T-shirts to match the colour of the bananas! Brilliant running everyone very well done!