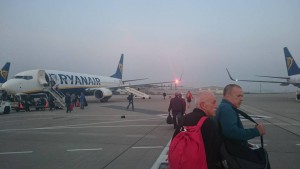 In the very early hours of 11th September, the Bats – Jim, Tim, Tom, Ben, Roger, the Legend, Bernie, Sparker, Mick and Kim assembled outside the bat cave with 4 other good men and true – Rich, Phil, Chris and Lee and set off for what must be the most underwhelming airport in the civilised world, Nottingham East Midlands.

The main course – to help Jim out of the carefree life of liberty that has been his hallmark for the past 41 years and try and ease him into the control of the strong arm of the law in terms of his impending marriage to Lisa.

For dessert, a modest helping of the Wroclaw marathon.

The Airport – little to report except for a couple of drinks and the odd custard cream (Marks and Spencer’s version being obviously superior to the very poorly filled and tasting Morrison’s version) similarly, an uneventful flights and bus into Wroclaw. An early lunch of a few beers and a burger, followed by a few more beers.

Off to the hotel (after what seemed like a 5 mile walk – we did finally work out that those bus like vehicles with wires sticking out that stopped outside our hotel were – in fact – trams) and out again for a quiet beer, followed by several noisy ones. 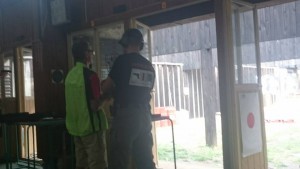 On this trip (2) was replaced by two activities – shooting and go-karting. On Saturday we all trouped off to a shooting range and fired a Glock pistol, a shotgun and an AK47. Safety was paramount and we were all advised where to stand whilst the shooting was in progress – although in Tim “target, what target?” Hulse’s case, the safest place would have been in front of the target. The best performance came from Chris “the legend and 007” Barlow.

Marathon day was soon upon us and Kim, having packed his wife’s running vest rather than his own decided to change shirts to avoid scaring the masses by having his belly sticking out and looking like Matt Lucas from Little Britain.

The day was extremely hot but all bats came in safely – although there is an ongoing stewards’ enquiry into rumours that Ben Gamble waited by the finish to avoid winning a large trophy and having to pay a £500 baggage supplement to Ryanair. The times were as follows:-

A well organised marathon – albeit the course itself missed out some of the better sights of the old town in Wroclaw. 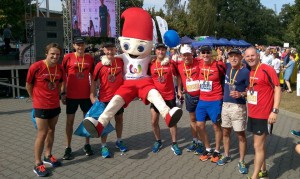 The post marathon recovery was uneventful except for a couple of bats struggling in the heat. All agreed that the rehydration process was a serious one and needed to be implemented with vigour. 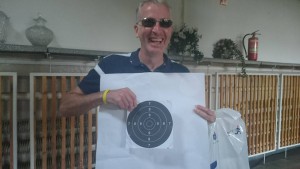 On Monday we went off for our second activity: go-karting and again a surprise winner emerged in Roger “out of my way” Taylor.  A final beer session followed the highlight of which was the Legend leading the beer hall in a chorus of “happy birthday” to help Tim celebrate his 47th.