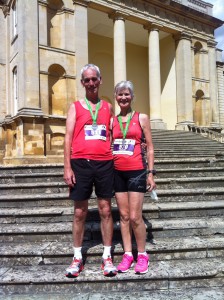 This is the third year the race has been held in and around the beautiful historic village of Kimbolton. The race starts and finishes in the grounds of Kimbolton Castle and this year attracted around 600 runners. The weather was too kind for us as average temperature during the race was around 22C.

The Castle is best known as the final home of King Henry Vlll’s first queen Catherine of Aragon. Originally a medieval castle but converted into a stately palace. It now houses Kimbolton School an independent day and boarding school educating approx 950 boys and girls.

The race is a one lap undulating course mainly on country lanes with two long hills and take in the counties of Cambridgeshire and Bedfordshire. The runners head out through the village of Kimbolton and pass through the villages of Tilbrook in Cambridgeshire, upper Dean, Lower Dean, Risley and Swinshead all in Bedfordshire before heading back to Kimbolton Castle. The first hill comes at 6 miles and the ” sting in the tail” is the long uphill climb comes at 11 miles where a large majority of the runners find it easier to walk than run – including myself. At least it gave me a good downhill run to 12 miles and the final mile is fairly flat finishing in the beautiful grounds of the Castle. 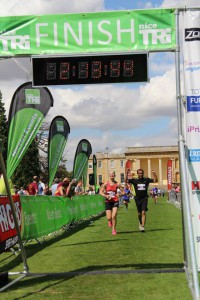 Whilst waiting for the race to start Andy Ellams from BRJ Run & Tri Club in Huntingdon (club local to Kimbolton) introduced himself and transpired that he lived in Stafford before moving to Huntingdon some 5 years ago and he ran our Flying Fox Marathon last year. We ran together for the latter part of the race and during the run I was overtaken by Richard Davies also of BRJ Run & Tri Club who mentioned that he also ran our Flying Fox Marathon last year and both runners enjoyed the Marathon but not the hills!!

The pre-race notes sent to each competitor stated that Bins are provided at each water station along the course for Water Bottles and Gels. Random Bottle and Gel dropping would result in disqualification. Further warnings were that anyone using the Castle grounds “relieving themselves” would also result in disqualification or worse as it is against the Law! (Toilet queues were very long) Also any runner crossing over the central road markings to the right hand side would be disqualified! 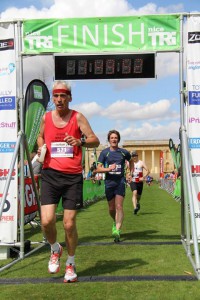 The race was organised by Nice Tri Events with chip timing and the chip was built into the race number. Each race number displayed the Christian name of the competitor. Every finisher received a Wicking Tee Shirt, attractive Medal, Banana and Water. Also at the finish they provided an Instant Result Service for each runner using a keypad to input the race number which produced a printout showing Provisional Results ie Gun Time, Chip Time, Race Position either Male of Female and position in Age Group.

This was our very first race in Cambridgeshire and overall the race was very well organised but due to the rural course there were few spectators en route, but in the grounds support was excellent as in addition to the main race there was a Multi-Terrain Children’s Fun Run.