For some weeks Captain Bernie has been mentioning (on the odd occasion) Cross Country and after a disappointing turn out from the Men last year he wanted a few more volunteers to run. Now Saturday’s are not ideal for me but I wanted to give it a go as I heard it is great fun and a good laugh.

So after taking the kids swimming and then dropping them off at a conveniently timed party I went down to the club and jumped in a car with Rose Gillick and Kevin Uzzell who have a couple of years of experience behind them.

Taking the scenic route through Nantwich to avoid the M6 we arrived in Winsford and parked up setting off to find Bernie in the club tent, he had kindly gone early to set up, bad ribs and all, so we could concentrate on running.

We were met with the air conditioned version as Bernie had obviously seen the weather forecast and thought we would appreciate the open sides (and roof). 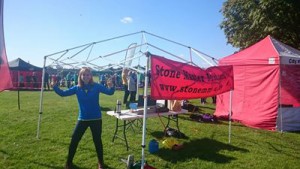 Following Bernie’s cajoling we had 22 names down who had offered to run and by 1pm we had 10 women and 12 men fit and raring to go. Several members had dusted out their spikes after several years who seemed thrilled to be back on it and then there was us newbies who didn’t know what to expect, but there was a real buzz about the place and with promise of chocolate and alcohol at the finish we were all very eager to participate.

The set up at Cross Country is that the juniors have several races first and then the U17’s and Senior Women go off about 1.30pm. At Winsford the Women do two laps (approx. 5k) of the sports field which starts on a slight incline and then loops round the field through a couple of woody areas with not many twist and turns, the Men then follow later about 10 past 2 but do 4 laps (approx. 10k) doing the same course.

So at 1.30pm the 10 Female Bats with the bottle of Prosecco awaiting them in about 25 minutes set off and all get a loud cheer as they go past on lap one with Amy Gamble leading the way up the field. Approximately 12-15 minutes later they pass us again on the start of the second lap with Amy still out front closely followed by Philippa Boote and Julia McArthur and then (in no particular order), Alison, Pam, Julie B and Julie E, Anne-Marie, Margaret Shaw and Rose Gillick.

Sometime then between 24-33 minutes they all cross the line after putting their all in (and even some giving some back) having done a great job for the Ladies and setting high standards for the men to follow.

2.10pm and time for the men to set off on their four laps, this being my first cross country I didn’t quite know what to expect. We started off on the sports field on a slight incline and then flattened out as we ran round the perimeter of the field with the occasional zig or even zag, I was surprised how quickly my legs started complaining but then we dropped down through a couple of windy paths and wooded areas which broke up the field and up and down a couple of banks which I quite enjoyed, we then circled back to the beginning and started lap 2.

In the head running laps isn’t always easy but then again you know what to expect and when to push on, the added bonus is that you get cheered (or abused) more than once by your teammates, family and of course the super fans, Lynne and Frank Shepley !! So getting through laps 2 and 3 and trying to pick up runners in front of you is the main aim whilst trying to keep other teams behind you as it is all about points in this game.

By the 4th lap are just trying to hold on and by this time Jim, Tim and Sparker were away in the distance and Fabian and Super Kev were still going well so although I wasn’t going to score any points I just tried to beat the few club runners in front of me just in case. After crossing the line and a brief lie down, I joined the rest of the team mates to cheer on the remaining lads, Alex, Jamie McArthur, Nick, Mac, Richard and Chris Ellerton all coming home in under an hour.

After making our way back to our air conditioned tent we all tucked into the chocolates and cake that was on offer (no champagne left by this point) and talked about the run.

For my first time at Cross Country it was fantastic fun and with the turn out and great team spirit I have already organised the childcare for Stafford Common and I urge anyone who has any doubts at all to come along because it is great fun and running as part of a team really helps.

Big thanks to Bernie for sorting it all out and the rest of the team for the encouragement – I have put a list of the times below, they are also on the website.

Bring on Stafford Common on the 24th October and look forward to seeing even more than 22 there.