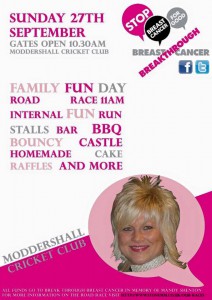 This first staging of the Moddershall 5 Mile road race took place on 27 September in perfect weather conditions. Organised by Mick Downes (and other members of SMM assisting) for Moddershall Cricket Club, the race was in aid of Breakthrough Breast Cancer in memory of Mandy Shenton, a former member of the cricket club.

The venue was the cricket club grounds which, perched on the top of a hill, overlooks Stone and provides stunning views across Staffordshire and to the far off ‘blue remembered hills’ of Shropshire. The cricket club had organised a fete and with ladies serving tea & cakes in the pavilion this was one of those perfect English sunny occasions we all remember from our childhood.

Anyone who knows where Moddershall Cricket Club is will also know that the advertised ‘undulating’ course description is a bare-faced lie. The precipitous banks surrounding Moddershall are worthy of a stiff fell race, as any local will tell you. However, Mick had arranged an excellent course with little country lanes, virtually traffic free, boasting trees, cows grazing, a picturesque pub with a duck pond and a lovely prospect of the Wrekin in the distance. This is what road running is all about and who gives a fig for the grim streets and grey tenements of city events? 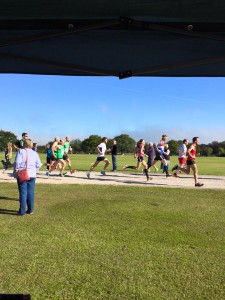 97 brave souls set off at 11:00, cheered on by a small band of supporters who probably (having just driven up Hayes Bank) never expected to see them again, a scene reminiscent of the Accrington Pals marching off cheerily to war-time France. However, return they did! With the men’s race being led in by Craig Pilsbury in 29:59 (unattached – someone sign him up!), Steve Naylor of Michelin AC in second place in 30:56 and Paul Swan of Trentham RC third in 31:13. The ladies were led home by the aptly named Wendy Swift of Staffs Moorlands in 34:10 with Pippa Steele (unattached but soon to return to SMM I am told) second in 37:24 and our own Kirsty Stephenson third in 37:48. 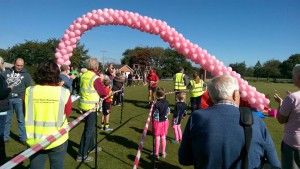 As for me, I puffed along at the back, trying to enjoy the beautiful weather and scenery and wondering why someone had moved Moddershall Oaks a half a mile further on from where I last saw it. However I, like several other SMM members who ran at Moddershall, had competed in the Winsford cross-country the day before and were entitled to feed a bit puffed. So that’s a big cheer for all those who ran on Saturday and a bigger cheer for Mick and the Cricket Club and all those SMM members who turned out to help make this a great little race. Let’s see it on the calendar again next year!