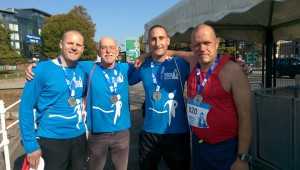 When my alarm went  at 5.30am on Sunday morning, I was wondering whether I really wanted to get up and travel to Chester to run the marathon. After picking Steve up on route to Stone, we met Kim, Marian and Mick at the tennis club to travel to the race together.

By the time we arrived in Chester it was clear that the weather would be perfect for the race. We were greeted by the race organiser who I’d last seen at the Paris expo when Bernie and I called in to see if he had any liquid refreshments. At this point there was no sign of his brother Tim Hulse, who we subsequently discovered was catching up on his beauty sleep at home.

Before the start at 9am I said hello to ex bat Michelle Rushton – Fox who was running her first marathon for 5 years, Jason Blount from Newcastle AC and our friend Stu who we met at the Vilnius race in Lithuania. 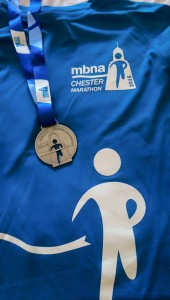 The marathon began at 9am prompt with a few hundred metres on the race course before climbing up to the city centre for a loop and then out towards Belgrave and Pulford. I’d moved in front of the 3:15 flag carrier as I headed to the half way point in 1:32. A two mile loop here saw us emerge back on the road where we were joined by the metric marathon runners.