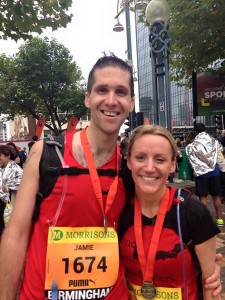 Following the constant email countdown reminders (there was no chance of forgetting) Sunday 18th October arrived and the apprehension of joining 20000 other runners for the great Birmingham run became reality. As usual I was sick with nerves and unable to stomach any food and could only manage a cup of tea!
Having researched the best travel options we drove to Wolverhampton and jumped on a train, 40 minutes later at 0930 hrs we arrived in Birmingham. Upon arrival we were greeted to a loving couple sat on the side of the street consuming strong ale and loudly exchanging insults, having been touched by the lovely welcome we hastily made our way to the start line trying to explain in the best possible way to our 13 year old what a crack rat was (a particularly loving quote she’d overheard the couple say to each other).

The race was well organised and signposted and minutes from the train station, the atmosphere was great with live music and a warm up for all waves. There were several waves and we ran in the orange wave. The start was split into two which merged into one after a mile, this was great as it reduced the bottle neck thAt can occur at the start.
We spotted Richard Fain before the start but obviously that was the last we saw of him as he finished long before us! The weather was overcast and cool but perfect conditions to race in.

The course was relatively flat and closed off to all traffic, the route led us through Bournville where we were greeted with lots of support and past cadburys world ( although we got no chocolate!) and also through the car park of Edgbason cricket ground. We ran through Cannon Hill park where music was broadcast from Free Radio, and again there was lots of support and a great atmosphere. Approximately at mile 8 I spotted the beaming smiles of Emma Dutton and Anne Grittiths, we gave each other some encouragement as we passed by! Bill, Dave and Julia all took part too and Sarah was there cheering them on!
Throughout the race there was plenty of water and isotonic drink stations and Spectators were giving out jelly babies and sweets, there was also a runner shower at mile 10. We caught up with a couple of Stafford Harriers during the race who we ran with after the park. Mile 11’s Killer hill fortunately didn’t turn out to be too much of a killer, certainly when you compare it to the riggers of Staffordshire’s countryside which we’re all used too, and after conquering that the end was in sight!

After the race we jumped back on the train and was home by 2pm giving jamie opportunity to sleep before his night shift. I would have liked to hit the shops with Emma, Sarah and Anne but instead I spent the afternoon watching christmas films with the girls and making up for not eating that morning!