Edwinstowe is in the county of Nottinghamshire and was the home of the legendary Robin Hood. It is an ideal location to explore Sherwood Forest with the famous Major Oak. 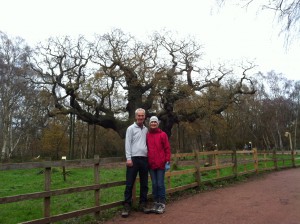 This year was the 8th running of the race through Sherwood Forest Country Park and the race was sold out by September with 600 runners having entered. The race HQ was at the Robin Hood Craft Centre in Edwinstowe on the edge of the forest and around the corner from St Mary’s Church where according to legend Robin Hood and Maid Marion were married.
The race crisscrosses the forest which took in the Robin Hood Way. It was run over an accurately measured traffic free undulating footpaths and bridleways starting and finishing on a grassed area adjacent to Edwinstowe Cricket Pitch.
The weather was warm 13C and still quite breezy following the aftermath of storm “Desmond” the previous day and the sun shone throughout the race.

As already mentioned, at the start, we ran approx 800 yards on a field then started to climb into the forest for about 1 mile. The track was not very wide, so with hindsight a fast start on the field would have been beneficial as it took some time to overtake the slower runners. The route crisscrossed numerous paths, some wide, some narrow with the occasional muddy areas, but overall the tracks were well maintained and off road shoes were the order of the day. The race was chip timed and good to get an accurate time especially on a trail race, as from experience very few trail races have chip timing. Also, met former club runner Gemma Butterfield who had entered and I managed to keep her behind me throughout the race.
Overall, I was pleased with my chip time of 52:14 (4 mins slower than my last 10k road race) and finished 172/501. Unfortunately, there was no M65 age group prizes so was put in M60-70 group and finished 5/23.
Margie finished in 66:50 but did not race as she just wanted to run a trail race.
The winners time was 37:07 but was 25 years younger than me!!!
All finishers received a technical tee shirt, lucozade sport and water. Chocolate biscuits were also available on the finish line but no jammy dodgers!! Good value for money as entry fee £12.00.
Mick Hall was also at the race as the official photographer. 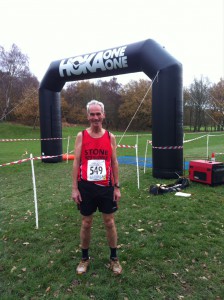