On Sunday a number of Bats ran the Richard Shaw 10k, sorry the Market Drayton 10k in rather warm weather but that didn’t stop a fantastic turnout on a humid Wednesday evening in Clayton. Twenty Bats (including two new recruits in Peter Jeffers and Ellie Evans) converged at the school to run the two lap race which is a popular NSRRA race and also a Club Championship race. 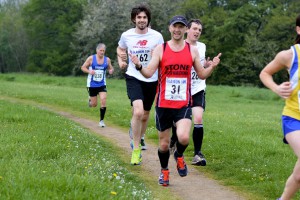 I won’t bore you with the details of my fun day at work but suffice to say I didn’t feel like running this race but by the sounds of it not many people were. With a weekend race, you get up, have breakfast, get ready, race, get home, get changed then enjoy the day – it’s different when racing in the evening you just want to put your feet up and have a pint !
Anyway, back to the race – it was an warm evening with an odd spot of rain as we all made our way down to the field for the group photo and getting ready for the off and just to remind us all it was only a quick blast, Ken Rushton mentioned Joel Harrison who when he finished the Clayton 10k would have completed 10 marathons in 10 days…….so stop moaning Phillips its 6.22miles !! It was a nice touch and Joel got a big round of applause from us friendly runners (until the whistle goes then man eat man).
7pm, count down and the off, which was a nice surprise as the last two races we started whilst we were all busy chatting. The course, changed last year, starts off with a lap of the field before out on to the road up to the roundabout which is a nice start to get the lungs working, we then make our way up Dartmouth Avenue, a gentle steady climb to ease your way into the race and find your race buddies. Unusually all my Group D colleagues were all in close quarters which normally means I have gone off too fast, my usual tactic is picking my way through the field after a couple of miles, however a quick glance at the watch showed bang on 7min/mile pace which was the target for this evening. So we had our usual early race chat making out as we weren’t competitive and just a training session etc. at the same time keeping an eye out on the couple of Group D runners who seemed to be 50-100 yards ahead….very unsporting.

As we turned off Dartmouth I had forgotten it climbed a bit more but on the steady climbs I tend to keep my pace even and usually pull away from people and although it was only a mile in we were starting to get stretched out. From what I could gather at this point there was possibly only 1 or 2 D’s ahead, one Rugeley runner who gained 50 points at Uttoxeter and A.N Other but couldn’t really see the letter as they were way out in front….at time of writing still don’t know if this was the case as I thought I knew all my rivals and it wasn’t anyone I recognised.

Anyway, I’m not competitive so why should I be worried ! After 2k we drop down through the woods and give a wave to Bryan Dale before turning back up Seabridge Lane. In the past I have struggled up here, however it didn’t feel as steep or long as usual so perhaps the speed work and hill sessions are paying off, we then have a nice down and up section of about 1k back to the Gatehouse pub before dropping back to the end of the first lap.
I make an effort in races to thank the marshals when I can and being a two lap race I made sure I thanked them all on the first lap because I wasn’t sure I would be able to speak on the second (surely if I can have a conversation in a race I am not trying hard enough but that’s another story). However, with Amy Gamble 100 yards ahead with the Rugeley runner just behind her I decided to push on a little at about mile 4 and closed the gap to the Rugeley runner as we came back through the woods.

Now as I mentioned I am not in the slightest bit competitive so as I was feeling good I should have pushed on past and given it all to finish in the best time possible…….I might have lied….if there was another D runner out in front I couldn’t see them so instead I decided that just nicking a point of this guy would be a bonus. So I sat behind him down the path letting a C runner speed past and then plodded behind him all the way back up the hill to about the 8k marker.
Then just as we started down the hill I pulled level and had a chat !!! I asked how he found Uttoxeter, told him our points were safe as there was no one close behind….blah blah blah and then as we started up the little hill I left him behind and pushed on. Now I didn’t know if he had much left in his tank but I was still feeling pretty good and knew I had enough for a sprint finish if needed so I increased the speed down past the Gatehouse and up to the roundabout.
At this point Amy was only a few yards in front so as we came back round onto the field I was in a dilemma, I wasn’t sure if my group D rival had managed to hold on so couldn’t risk slowing down but passing people in the last few yards is a bit mean but I went past Amy and another girl in front and crossed the line in 43:21 which was only 25-30 seconds slower than South Cheshire. The Rugeley runner was a good 20-30 seconds further back so perhaps I should have gone for it at 8K, maybe there is a quicker time in me yet….and this from someone who didn’t really want to bother at 6:45pm !. No idea on how the NSRRA points have gone but we are definitely competitive this year and hopefully get some prizes on the board – will post an update when I know more.

At this point Paul, Tom and Tim H were already home in some cracking times (37,38,40 mins respectively) so we cheered the remaining Bats home one by one with some great performances again – especially as some had raced Market Drayton, I believe Clare Irving PB’d. Peter Jeffers in his first competitive race for the club came home in an excellent 48:26 and Ellie Evans who joined this week managed 67:27, so brilliant efforts all round.
There was a big round of applause for Joel Harrison as he completed his fantastic effort raising lots of money for Douglas Macmillan and then the usual slapping of backs, shaking of hands and sweaty hugs with all the friends (now we have finished of course) and the see you at the next race comments.
We had a quick couple of photos whilst Michelle had some first aid – hope you’re okay now Michelle ! and then rode off into the sunset to see our families, secretly hoping the kids were all in bed so you could put your feet up and have that pint you dearly wanted when you left work.
All the results are on the website, I will update the Championship tables shortly (Tim and Amy still leading the way but Paul Swan catching you up Timothy).
Thanks to all the marshals, all the supporters and all my fellow runners, especially the Bats for another cracking race night.