I have never ran the Uttoxeter Half before as it always falls on my son’s birthday, however this year my darling wife and eldest agreed to have the birthday party on Bank Holiday Monday allowing me to run a slightly undulating course around East Staffordshire.

Got there quite early with Anne-Marie and met up with fellow bats to discuss tactics for the day, my plan was to take it easy and aim for 1:45 (8min/miles) to see where I was up to in preparation for the Potts ‘Arf in a few weeks where I wanted to better last year’s 1:39 ish.

Paul Swan lightened the mood by suggesting he felt this was a harder race then Potts so I decided to just go with it and see what happened. There were 11 of us in total a great turnout for a cold, breezy Bank Holiday.

After a very light warm up we gathered at the start and before we knew it we were off….it was quite a busy start with a lot of weaving in and out needed to get going and it is a gradual climb up from the racecourse towards the first turning.

For the first two miles you climb out of Uttoxeter and I found a steady pace of 7:40 ish, slightly quicker than planned but felt good. In the distance I could see several Group D and Group E runners including Kevin Uzzell and just in front of them the ‘Pocket Rocket’ Kirsty Stephenson and ‘Insert Nickname’ Amy Gamble. I was running alongside Grahame (Amy’s brother) who fresh from London was feeling encouraged that we could see Amy and in our stupidity thought we had a chance! 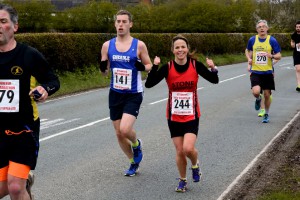 The next 3 miles were undulating and breezy with what felt like more climbs than descents and I passed Kevin and reeled in the D & E runners – Mile 6 is a nice little downhill and a group of 6 or 7 of us had a chat about London and points from today before myself and Grahame pushed on to try and catch the ladies.

Next came the hill (about mile 7), the course profile looked like it was going to be a beast but it was no worse than the hills we tackle on a Wednesday or Sunday run, the only difference we don’t have a breather as we cross stiles or have a sneaky rest as we muster back but I plodded up it keeping Amy and Kirsty in site.

At this point I hadn’t really looked at my watch so a quick glance told me I was on course for inside the 1:45 but by how much wasn’t that sure so after the climb we had a nice quick downhill where I opened up a gap between the D runners but didn’t seem to be catching anyone in front. Paul Swan hinted that after about mile 9 it climbed continuously in readiness for the last downhill at 12 and he wasn’t wrong. There was occasional level and downhills but the majority was incline and it was at this point I caught a glance of two Rugeley Runners with Group D on their backs and also noticed Amy had opened a gap in front of Kirsty.

Mile 11 – still going up I passed one of the Rugeley guys and Kirsty, both of us cursing the lack of downhills and feeling like my legs were going to fall off, this time I checked my watch and realised I was going to be close to my PB which was a surprise.

Mile 12 came and the much needed downhill with the racecourse in the distance, unfortunately the downhill is the same for everyone and although I picked up the pace so did Amy and the other Rugeley runner and even though I kept pushing I couldn’t close the gap and finished about 30 seconds behind Amy and 3 behind Rugeley missing out on 50 points.

There were also PB’s for Tim Clegg and Bonnie Seabridge which for this course is a fantastic effort.

We waited around for the awards and it was a very successful scoop for the Bats with Paul Swan 2nd M50, Amy 1st F40, Kirsty 2nd F35, Kevin 1st M65 and the results showed Margaret 1st F60.

The ladies also finished a very creditable 3rd in the team event.

So yet again this season we have a great turnout by the Bats, some fantastic performances, lots of NSRRA points – the Bats are on the Up – oh did I mention I got a PB. 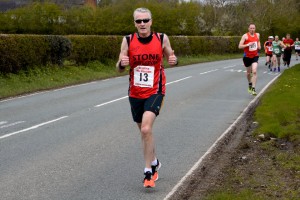