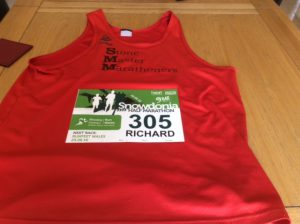 I decided to enter this half marathon as a few of my fellow runners who I run with locally were looking to enter a race in Wales to celebrate Jason’s 47th birthday which was on race day and Snowdonia fitted in perfectly as it was only a stones throw away from Llandudno where Jason’s family lived.

This year the organisers changed the route some 5 days prior to race date and I received an e-mail advising that they had made some improvements to the course. So rather than running along the road (first 3 and last 3 miles) to Trefriw and back, have added a loop around another lake (Llyn Crafnant). It made the route a tiny bit tougher but they said the views certainly made up for it, so now we run around two lakes and have 2000 feet of climbing.

We managed to find B&B accommodation in Trefriw some 3 miles from the start and left for Wales on Saturday taking the scenic route stopping in Llangollen visiting the steam railway and had lunch at Carrog watching the steam trains running to Corwen from Llangollen- a great sight taking me back to my childhood days! We arrived at Trefriw mid afternoon only to discover it was celebrating a 3 day walking festival and the town and pubs were heaving with both walkers and runners alike. Fortunately, we had booked a table at the local restaurant, The Old Ship, prior to arriving and it was a good decision as every table was taken.

After meeting the B&B owner, we were advised that there was a traffic free metallic road running from the village to race HQ and after walking the route on the Saturday it took us about 20 mins. It turned out to be an ideal route for warming up on race day. 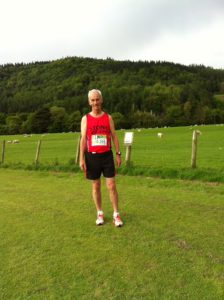 Race day arrived and weather forecast was cloudy with rain early afternoon- how wrong they were. We decided to walk/jog to the start from B&B and as we arrived at Race HQ the heavens opened and it rained all morning from the moment the gun went to crossing the finish line some two hours later and then we were blessed with hailstones jogging back to our accommodation getting even more soaked from head to foot!

On arrival at Race HQ, I was surprised to see a few runners from NSRRA- one in Group A, two in Group E and two in Group F in addition to my local running buddies.

The route was interesting to say the least. From the race HQ at Llanwrst Football Club we turned left and the first (and last) quarter of a mile was the flattest section of the course. Just after a quarter of a mile we turned right and headed up the hill for 0.4 mile- sharp climb of over 200 feet where I was already walking!, then we turned right and had a slight downhill section and the views across/down the Conwy Valley were breathtaking then another sharp climb towards the Hamlet of Llanrhychwyn. The climb (approx 400 feet) up to/through Llanrhychwyn went on for 1.5 miles although it is in 3 distinct stages albeit with hardly any respite between each. At 2.25 miles we finally descended towards Llyn Geirionnydd – one of the most popular lakes in the area. At this point we had a relatively flat section to the far end of the lake about 4 miles into the race. We then turned right onto the forestry track to Mynydd Deulyn and on this track we climbed about 400 feet in the next mile,once at the top (which a smiling face was painted on the track) we had a fast decent of approx 1.25 miles to Llyn Crafnant – one of the most beautiful lakes in Wales. We ran 2.5 miles around the lake before heading towards Trefriw ( as I started my run around the lake, the two leading runners were leaving the lake, so already 2.5 miles a head of me and they were at mile 9 and I was still not quite at the half way stage). Just after the 10.5 mile point we faced the last notable hill as the road climbs approx 450 feet in half a mile (if you ran from bottom to the top without walking a special medal was awarded to you at the end- all done on trust! I walked 75% of the climb as did virtually every runner ahead and below me- it was hard enough just to walk up the hill!! At the top the road levels off and we are back in Llanrhychwyn where we turn left and ran down the steep hill which we ran/walked up 10 miles previously and my quads were killing me on the descent to the valley floor and then along the flattest section of a quarter of a mile to the finish. 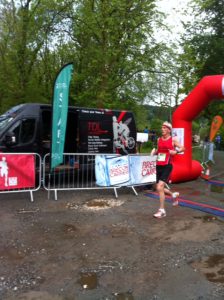 I am entering again next year as the scenery was stunning throughout the race and will try and run final hill to receive the elusive medal. Let’s have a few Bats running the race in 2017 as it will be a race to remember. In fact it is harder than the Snowdonia Marathon which I have previously run.