“It will be great – we can stay at the Drunken Duck and have a wonderful weekend – and you three can run your race and we’ll picnic by the lake – go on sign up now”. It was October 2015, my birthday, and we were staying in Otterburn with our oldest friends. Sat in front of the log fire with my second glass of MacAllan, my wife Judith’s suggestion seemed perfect. Andrew and Marcella had run the race that June with Marcella’s sister Mel and her husband Guy and were enthusiastic that we should join them for 2016. It was only after I had signed up for the race that Judith realised, to her dismay, that she was already committed to working that weekend and couldn’t come.

So it was five that gathered on the eve of the race at the Drunken Duck in fabulous sunshine. I carefully considered carb-loading, abstaining from alcohol and going to bed early, however, this was a race that I entered to enjoy the company of good friends. Having got my excuses lined up, I quaffed a couple of pints of Catnap – “well balanced bitterness leads to a long dry finish, with a fruity zesty character” (sounds like me). Gin cured salmon & wasabi followed by lamb and a glass or two of Talisker completed the pre-race preparations.

The Lakeland Trails Marathon, Half Marathon & 10K is a big event with two marathons and two half marathon races, a 10K and a children’s race all on the same day. The first of the marathon races set off at 07.00 which meant that enthusiastic runners were stomping about the hotel demanding fruit juice & porridge long before I wanted to get up. I suspect that they were the diners abstaining from alcohol & going to bed just at the time when we were contemplating pudding. 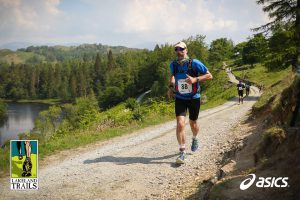 Andrew was the only one of us running in a marathon and his race started at 09.00, so we all got to the start in time to cheer him on his way, before registering and queueing for the portable toilets.

At the start of our half marathon at 10.00 the sun was already high in the sky. The course took us through the fields up Lake Road towards Coniston village, across Church Beck and past the Ruskin Museum. We were soon out of the village and left the road for the Cumbrian Way footpath and into the woods. The tree cover provided welcome shade, but the narrow path funnelled the large group of panting runners into a tunnel of trees, rocks and ditches. The field had not had time to spread out and as the uneven, rocky path climbed up the valley side faster competitors had frustratingly little opportunity to pass the many slowing runners. 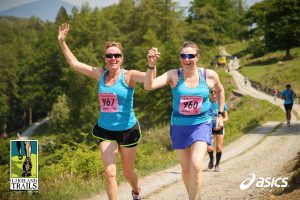 Low Yewdale brought the first drinks stop and it came at the foot of the steepest most rugged climb yet. The need to take on water stopped us dead in our tracks. This was not bottles of mineral water handed out by local Scouts, but big camping holiday canisters from which you filled your own water bottle or grabbed a plastic cup and a welcome square of flapjack.

Running up the hill that followed proved too much and everyone stopped after a few strides and walked. I tried to run (I’ve never walked in a race before), but the combination of the steep incline, loose surface, tired legs and trying to get past other people defeated me.

The path took us through Tarn Hows Wood and then out into the sunshine again with fantastic views of Tarn Hows below us. This brought the challenge of the official photographer and I did my best to smile and wave. The circuit above Tarn Hows brought lots of welcome support from walkers and families.

The descent to the lake side was steep and rugged and it was a relief to stretch your legs and run fast. When we got to the lake it felt that we must be nearly there. We weren’t. The run in was long and hot. It took us on a path along the shore, past the pier for the Steam Yacht Gondola and back into the fields of Coniston Hall and within touching distance of the finish line. Then frustratingly we veered away from our destination and into the next door campsite, round the lake shore and finally back in a big loop to the finish.

This was the second of three hilly half marathons on consecutive Sunday’s for me. I thought Buxton was challenging, but a trail half is quite different to running on the road and with temperatures in the mid 20s it was tough as our finishing times showed. Ice creams and a bottle of Jennings Bitter helped the post race recovery. The Potters Arf this weekend should be easier (?) but will it be as scenic?

We had fun, but will we do it again next year? I think Judith has cleared her diary already!