Last year I did my marathon debut (and still only one) at Potts so I gave this a miss, however I am concentrating on some shorter races this year and what could be better than a quick 4 miler on the flat scenic roads around Cheadle ! (Answers on a postcard).

The last few races I have approached with a more positive outlook to enjoy rather than to get wound up about competing and it appears to have worked as clocking up PB’s galore and plenty of points in the NSRRA. So much so John Edwards commented on my relaxed approach at Berryhill more than once as I tootled round “are you going to get out of second gear” was the shout on the 1st two laps…. 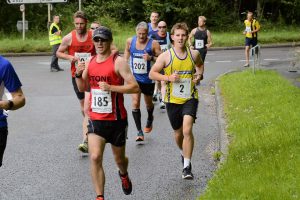 However, Ken Rushton kindly pointed out earlier in the week that a group prizes were up for grabs and knowing Rugeley Runner Chris was not running I started getting it in my head that I needed to try harder.

Early morning prep changed slightly as I risked a cup of tea instead of the usual water and even had a shave……as most of us know shaving is a pain and weekends we don’t need to bother….especially the girls ! So I sat there waiting for Anne-Marie to pick me up at 9am all cleanly shaven and kitted out ready for Cheadle…I was slightly thrown when Nick Boulton drove up but with Julie and Anne-Marie in the car we set out on the short trip to Cheadle.

Parked up, met fellow bats meandering around the field, quick wee and then the usual spotting fellow group D runners. We all chatted as usual about how crap we felt and anything under 30 minutes would be a bonus etc. (even though Facebook chatter had been 29 minutes with 7,8,7,7 pacing according to Ollie Clarke).

Adrian from Cheadle, Ollie and Jon from Newcastle, Matt from Trentham and a few other group D runners were about so we were analysing the competition for the next 15-20 minutes before the race started. Ollie has been picking up pace recently so needed to keep an eye on him, it was Adrian’s home course and he ran well at Shugborough and Matt Burley had some great runs early on in the year but has been clocking in some titanic performances at various events for http://chelseaburley.wix.com/chelseaburleytrust – so might not be up for a 4 mile speed session.

Anyway 10:30 soon arrived and the sun was trying to shine and it was quite a humid morning with the threat of rain – typical British Summer – but we set off on the first flat, if not slightly downhill mile of the four.

I started quickly alongside Adrian who seemed to set off quicker than normal…was this confidence on his home course ? I settled in behind him as we found a 6:30m/m pace wondering if it was a bit quick with the hill to come but it felt okay and it was only 4 miles !!!!! After about ½ mile Matt Burley jogged past and we commented ‘there goes 50 points’ he looked strong and from earlier races in the season at Newcastle and South Cheshire we didn’t expect to see him again.

Then comes the left turn onto Freehay bank – it is described as 1 mile flat, then 1 mile hill, then flat then down…..well it is longer than 1 mile up and it’s quite tough. It is one of those hills that you just have to find your rhythm and dig in, you climb, it levels off, you climb a bit more, then a bit more then you turn into a narrow lane and then climb a steeper bit and (have I mentioned the climb) you eventually appear at the top. At this point I could still see Matt perhaps 100 yards ahead and had not heard or seen anything of the other guys in D behind me, a quick glance suggested they weren’t closing in fast.

Anyway at the top of the hill you are over half way and I was using Amy Gamble who was between Matt and I as a target to get me closer. Amy was having her own battle with another ‘L’ lady and it was helping me focus on closing the gap. Then comes the fun part a big downhill, I had forgotten quite how long a downhill it was – I caught up with Amy and I think I muttered something along the lines of lets catch these two up, with NSRRA it’s all about the points, and slowly but surely Matt was coming into range.

Over 3 miles down and you are telling yourself less than one mile and I can stop, but you know it is going to be a hard mile. I caught Matt up with probably ½ mile to go and sat behind him deciding if I should go for it or take him on in a sprint over the last 200 yards….well Matt is a lot taller than me and I am guessing those long legs might give him an advantage over a short sprint so I took a deep breath and surged past him. I pushed on and we turned back out onto the main road where we run for about 200 yards before turning into the park for a 50 yard finish on the grass – about halfway along I glanced backwards and I could only see Amy and not Matt so I turned into the field and basically jogged casually over the line with 50 points in the bag ! As you will see from the picture I was walking over the finish line, although it appears I stopped a bit too early as my watch was 10 seconds quicker than my official time…oops !

Amy was right behind me and had passed her ‘L’ competition so an extra point gained.

I was passed my Winner’s Mug and turned to congratulate Matt who finished not too far behind – he did admit when I passed he had nothing left  so he did well to come in with 49 points. The next 10-15 minutes are spent cheering on your fellow runners over the line whether they are Bats, fellow Group D runners or other likeminded people who just run on a Sunday morning for FUN!

One of the highlights of cheering in the Bats was Tim Clegg’s Usain Bolt sprint for the line, perfectly captured in the attached photo ! As Tim said he just needs to work on the other 3.95 miles ! 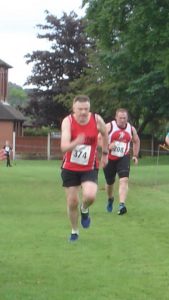 19 Bats completed the Cheadle 4 with Paul Swan with another top ten finish in under 24 minutes with Tom Wilson not far behind. By my reckoning we had 4 age group prizes with Amy, Kevin, Pam and Joyce and 3 Group winners with Bonnie and Mac alongside myself.

I won’t list all of the results as they are now up on the website but I know mine was a 4 mile PB and I am sure there were many others.

Cheadle 4 is a good race, lovely part of Staffordshire only 4 miles long so get home in time for lunch and well organised by a good running club and I am sure I will be back next year !

Next up Trentham 10k, I understand that’s a flat course as well.