This is one race that I’ve had booked for nearly 12 months following the high recommendations from Richard Shaw.  After another season of NSRRA races the appeal of a ‘downhill’ race was too tempting to pass up and being held in the best county of Derbyshire (I was born in Chesterfield) meant that it was one that I had to do.

It was decided that this was going to be one of those races that the family, including doggy,  would tag along to and we’d talked about the arrangements for it weeks before however when talking about having to leave at no later than 7.45am to get there on time the appeal of having to get up at 7am on a Sunday morning was not great.  As you may know I, like Paul Phillips, like to be at a race nice and early and for me a 7.45am departure left me worried about being late.  According to calculations I needed to be at Ashbourne Leisure Centre to board the bus by no later than 9.15am and I would need to ‘use the facilities’ before then so that means arrive by no later than 8.25am.  Justin assured me that even though ‘aarouteplanner’ predicted 40 minutes that he’d get us there way before that, oh yeah but you didn’t predict roadworks and cow herds did you dear!!  We eventually get there in silence, surprisingly park up with no problems, had to plead with the woman at Reception to change a tenner for parking then a couple of loo stops, quick drink, kiss the dog and board the bus.  Fortunately Richard and Victoria had saved me a seat at the front – thank you.

It was a lovely clear but cold morning and as the bus arrived at the start we all shivered our way up to Parsley Hay.  We met up with the other Bats running and the general feel was that it was a really good race to do, a lucky thing given that the bus had gone.  The race started a little late and we were set off in waves.  Victoria, Richard and myself got off in wave 2 and I was determined to try and practice my race pace ready for Dublin marathon in 3 weeks.  My long runs have been rubbish in training so I was really worried about whether I would even get round today.  There was no congestion like at some races and the trail just let you get into a good stride early on.   I hadn’t taken a drink or fuel as the promise of goodies at the drinks station was enough for me.  Jelly babies, Jaffa Cakes, Coke – yum and no bananas yay!  The stations were well spaced out so before I knew it we were passing through the last one at 9.5m.  You would think that one relatively straight trail would be boring but there were so many changes of scenery that I never got to the stage of “oh god there’s another sheep”.

I never tend to look at my watch during a race, rightly or wrongly but at just after 12m I thought I’d have a little peak and was a bit confused as to why it said 1.41, maybe it had stopped but the mileage was bang on.  Maybe I was on for a whopping PB and finally get the sub 1.50 that had evaded me for so long.  The last stretch was the only uphill part of the course and was well supported so I pushed on and felt strong going over the finish line.  I was so pleased not only to bag a PB but to actually feel like I’d had a good run which leading up to the marathon is worth a lot. 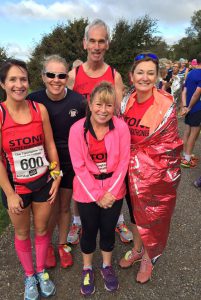 Victoria, Richard and me regrouped at the finish line and I became a serial hugger, much to the kids’ disgust, from the elation.  There were more goodies to be had at the end but I’d been promised a pub lunch.  There were many other PB’s on the day – well done to everyone!

In summary, the race was well organised, on an excellent fast course and definitely one that I’d do again.