This was the first time I had ran the Congleton Half Marathon as it falls on my youngest’s birthday weekend but he agreed to have his birthday party on Tuesday, his actual birthday thus allowing me to run 13.1 miles on a Sunday morning  – Thanks Ben !!

For some reason I had gotten myself wound up more than usual and didn’t sleep very well for a couple of nights preceding this race. I suppose my competitive side had well and truly kicked in and knowing 50 points would all but see me promoted from Group D and also the possibility of a PB made my head do funny things in the lead up.

Anyway, set off to Congleton nice and early and halfway there realised I was going to get there ridiculously early so had a quick comfort stop in Sandbach services to make sure the sun had risen before I arrived !! (I wasn’t the first to arrive but not far off).

First job was to collect my race number and chip and then back to the car to get sorted and keep warm as it was a bit fresh and then the long wait before other Bats started appearing.

The race start was 9:30 so by about 9:00 there were a few bats hovering round and we managed to get a couple of pictures, then comfort stop before a planned  warm up. However, about 10 past there was a call to go to the start so the warm up didn’t happen other than a gentle trot of 200 yards to the start area.

It was quite a crowded start area but I lined up with Jo, Kirsty and Mick hoping they would drag me round for a bit before disappearing into the distance. The first mile or so is relatively flat before dropping down (the future ‘Sting in the Tail’)  and then a steady climb back off before levelling off. It was quite steady start and when we passed Bryan Dale at about 3 or 4 miles we were all still together and managed a great Bats in Flight photo, however very shortly after that the others started pulling away and I did all I could to keep them in sight for the following few miles. 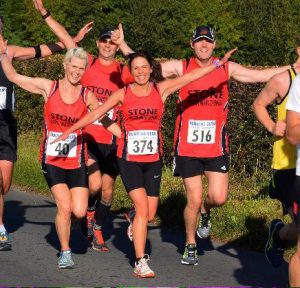 Unlike other races this year there was no-one near me that I knew, mainly because a lot of Group D runners weren’t present but also going off a bit quicker the ones I did know were left behind so it was a bit of a lonely slog on slightly undulating but not hilly lanes avoiding tractors and one particularly rude driver who decided it was okay for her to weave between us and the marshals !

After about 10 miles I had well and truly had enough, the marathon a couple of weeks previous was taking its toll and I gave up any thoughts of a PB and just settled for the fact I was in front of all other group D’s and should get my 50 points. At about 11.5 miles there is a big downhill which caused a bit of a pull in the thigh so I had a brief stop to stretch off before turning the corner and starting up the Sting in the Tail. Now anyone who runs round Stone in the summer knows we climb much bigger hills so this Sting was nothing more than an irritating itch but after 12 miles it feels much worse.

The last mile was a bit of drag as the sun was quite warm by now but I crossed the line in 1:35:03 (chip) which was over a minute better than my PB at Uttoxeter earlier this year and my goal of 50 points and a PB was achieved, the only annoyance was why did I stop for a stretch…it could have been sub 1:35…..next time !

I made my way over to Jo Bentley who was first in for the club and also 1st F40, Mick Downes and Kirsty ‘Pocket Rocket’ Stephenson who all looked fresh. We then watched as the other Bats came in, I have put all the results on the website so sorry for no mentions here but work keeps getting in the way….how rude !

Once we were all in we managed a couple of photos and then made our way back to the school to pick up goody bags and T Shirt and then all went our separate ways.

It was a great race and although I left feeling a bit annoyed at myself on reflection my Garmin said it was my quickest 10 miles, 15K and 3rd fastest 10K and of course PB for a half so perhaps it wasn’t all bad.

Later that evening when the #thumbsupforemma photos started appearing it made the hard work worthwhile and that running with the Bats is absolutely fantastic and the camaraderie we have is one of the main reasons I run.