Running away from it all – Kathryn Ambrose

When I was offered the chance to take on the role of Stone Master Marathoners’ Mental Health Ambassador in November of last year, I seized it with both hands. I am passionate about running, and I am passionate about promoting good mental health. I am fortunate enough now to be in charge of my own mental wellbeing, and running plays a crucial role in this.

I first attempted to run at the age of 18, when – in the full grip of an eating disorder – I wanted to find any way I could to burn calories (whilst simultaneously not consuming them). Head pounding and woozy, I hauled my skeletal frame around a two mile loop, unable to run for more than around 100 metres before stopping to walk. Running, I decided, was far too painful. Following a long journey to recovery (which wasn’t to be fully complete for many years), I took up regular running in 2001. I found it to help me with my episodes of crippling anxiety and low self-esteem – it taught me to respect my body, not for what it looked like, but for what it could do.

Unfortunately, I was still vulnerable, and this became particularly apparent both during and after my first pregnancy. As so many women do, I hated the way my body was changing in front of my eyes and I had no way of controlling it. I continued to run, but obviously not as far or as fast as before. However, this activity, I was told, played a crucial role in saving my life. The birth of my son in September 2007 was both difficult and traumatic, and the mental scars endured long after the physical ones had faded. I was diagnosed with a severe form of PND and PTSD, and it took a long time to recover. Running, again, helped immensely with this. Six years later, after I had my little girl, I couldn’t wait to run again, and I’m happy to say that this time, the PND did not recur. At the time, my husband worked long hours, often away from home for weeks at a time, so I had to learn to be flexible and creative with my time management. This is partly why I started running with the buggy, as it not only gave me a good workout, it also sent my little girl to sleep!

Life has a habit of throwing challenges in your way, and in 2014 I faced something that I honestly believe – without running – might have sent me into a spiral of depression. After twelve years of marriage, I found out that my husband was having an affair. Running became my coping mechanism – my best friend when it seemed like everyone wanted to have an opinion but not listen, when I changed my mind every hour about what I should do, when I wanted to stop crying (because I can’t cry when I run). Then one day I had this crazy idea that I would do something I had always dreamed of but never dared to do  – an ultra. In March 2015, I completed the Millennium Way, 41 miles along canal and very boggy fields. As I crossed the finish line, elated, I felt something snap inside  – it was as if a fire had been ignited inside me and it gave me an inner strength that I never knew I possessed. If I could do this, I could do anything. 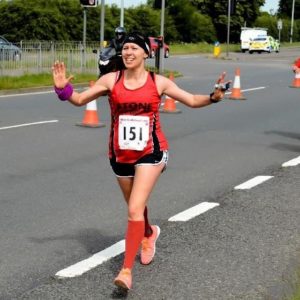 Eight ultras and a few marathons later, my life is completely different to the one I left behind. I feel happy, fulfilled, and at peace with myself. Of course, there are occasional days when anxiety rears its ugly head, but I have the tools to deal with it now. I have thought long and hard about writing this, as I am aware that it is a very personal account. On the other hand, I am also aware that many people deal with such struggles on a daily basis and my story is nothing unusual. At the same time, I strongly believe that awareness raising comes about as a result of people’s honesty, and that to break down stigma we need to talk about what we may prefer to keep hidden. For many years, I was the one with the happy face while I was slowly dying inside. These days, what you see is what you get. I have nothing to hide, and neither should you.