At the beginning of October 2016 I received a letter informing me that I had been unsuccessful in the ballot for the 2017 London Marathon.  I was relieved and disappointed in equal measure.

However, the following day I realised that actually, this was something that I really wanted to do, so I applied to Refuge for a charity place and five days later found out I had been successful with my application – now I was properly worried!

Every year I would sit on the sofa with a cup of tea and bacon sandwich watching the marathon with a lump in my throat, marvelling at all the amazing people and thinking, “I’d love to do that one day” but now I’d got the actual day – Sunday 23rd April, 2017.

In 2009, I was diagnosed with an aggressive stage 3 cancer and spent most of that year having surgery, chemotherapy and radiotherapy.  Ironically, I walked the Race for Life at Trentham in June and the effort required literally, nearly killed me.  The following day I was admitted to hospital with Sepsis and had to have emergency blood transfusions.  It was after that little blip that someone said to me, “You will have to run a marathon once you’re better”.

That comment settled somewhere deep down and was never quite forgotten. 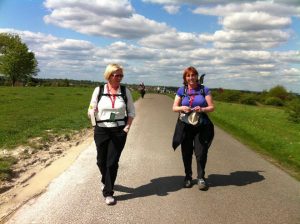 A year or so later I started walking and those walks turned into very long walks.  When I completed a walking marathon in Manchester for the Shine Cancer charity I thought that was the peak of my athletic achievements and the marathon mission was accomplished.  But like Forrest, I kept on walking further and further (London to Brighton, round the Isle of Wight in 24 hours and the entire Cotswold Way in 3 days).

Then almost three years ago in the summer of 2014, I downloaded the Couch to 5k app and thought I’d give running ago.  I stuck religiously to that app running/walking/wheezing up and down the canal towpath and the day I ran 30 minutes without stopping I thought I was an Olympic athlete.  (Clearly delusional, everything hurt and I had purchased the entire range of neoprene support bandages in Boots, but I kept at it).   The following summer I completed the St. Michael’s 10k in Stone and as I crossed the finish line, a friend I knew from school thrust a leaflet at me for the Stone Master Marathoners.  Well, I was pretty chuffed with my performance that day but thought it was stretching it a bit to consider myself a “Master Marathoner”. 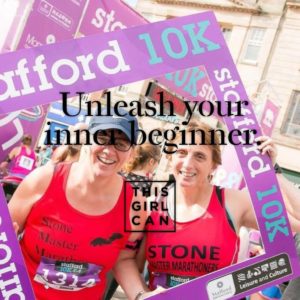 I gathered all my courage and went along on my own one Thursday night “just to see what it was like”.  From the moment I got out of the car looking a bit lost, I was met with friendly faces who invited me in, made me feel welcome and assured me that they wouldn’t all point and laugh at how slow I was – in fact they like slow, plenty of opportunity for “mustering”.

I survived that first night, people spoke to me and ran at my pace and they seemed genuinely pleased I was thinking about joining – so I kept going – and became “A Bat”.

I saw other people who I ran with entering races and so I found the courage to do the same and completed 5k’s, 10k’s and then the Stafford Half Marathon in Spring 2016.  Approaching 50, the thought of a full marathon became vaguely possible rather than a pipe dream.

So there I was in October, with a confirmed place and a training plan stuck to the kitchen wall. 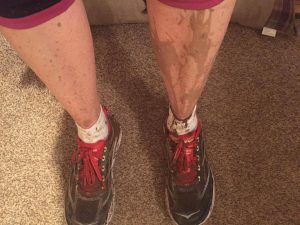 The training plan was for 16 weeks, starting on 1st January and taking me all the way to “the big event”.  It assured me that if I followed this plan, I would give myself the best possible opportunity of crossing the finishing line, so that’s what I did.  At the end of every week I put a shiny gold star on the plan after the Sunday run (because I’m that childish).

Although the plan required you to run four days each week, the only really long runs were on a Sunday so it didn’t seem that bad.  But by week six, heading out on a freezing Tuesday night to run around the streets and industrial estates of Stone was losing its appeal.  Getting out of the door was the hard part and I wouldn’t have done it if I hadn’t have been running with such a great group of people, and Bill, who would shout mild abuse at me if I slowed down.

Who would have thought a year on, I was looking forward to the Stafford Half Marathon 2017 being a “fall back” week in my training plan? 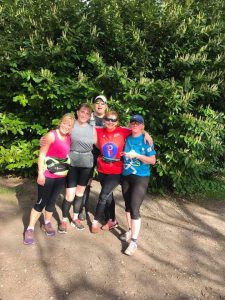 The two low points of the training were the Sunday I first ran 16 miles and suddenly and inexplicably my legs felt were about to explode with pain, meaning I had the embarrassment of walking back through Stone in my SMM t-shirt looking like an arthritic tortoise.  The second was the Sunday we did 18 miles and it lashed down with freezing rain for the entire duration making me think – is it worth giving up my Sunday lie in’s for this.  But it was too late, I was committed, I’d told everyone I was doing it and short of breaking a leg, I was going to have to see it through.

I took a day off work to complete the final long run of 20 miles and with Anne, Julia, “ultra Dave”, Paula and Jayne on her bike.   We had a lovely morning in the sunshine running along the canals and across fields –and discovered the magic restorative properties of dried mango.  At the end we felt good and were reassured that we might just be able to do this.

Two weeks of tapering allowed the doubts to creep back in and I spent the last week convinced that I’d done nowhere near enough training (despite all those gold stars), my foot and knee started to hurt for no apparent reason and I felt more than a bit nervous.

On the Saturday I travelled down on the coach with Julia and lots of other runner and supporters.  Fortified with a cheese and bacon oatcake the nerves seemed to abate, I was committed now so I just had to “man up”.

Fast forward to 8.30 Sunday morning, we were dropped off at Blackheath Common and heading towards the Red start with the rest of “the masses” as we were affectionately referred to.   This is the start area where the majority of people were running their first marathon and raising money for every conceivable charity you can think of.  Whilst I’ve got nothing to compare it to, I can honestly say this was the best and most supportive environment I could have imagined.  The organisation was amazing, (just how many portable loos are there in this world?) everyone was smiling and chatting.  I was looking out for the other “Refuge” runners in their pink and white vests, as we had become Facebook friends throughout the training and to meet them in person was just great, hugs all round, like long lost friends.  We’d shared our stories and training agonies on-line for the last four months but this was the first time we’d actually met in person.  Just as important, we then met up with Anne and, although not in our Bat colours, the three amigos were together and ready to “do this”.

I have never stood in such a diverse, focussed and happy crowd of people as we made our way to the start line and after half an hour we were finally able to break into our 5 hour lightning pace!  26.2 miles was a bit of blur in places but some of the things that have stuck in my memory are;

Mile after mile the crowds never stopped, sometimes it was a blur, at other times we could focus no further ahead than the next mile marker and the reward of a jelly block.

Of all the memories I will take away from London, three are very special;

To enable me to come to London, my two boys were staying with my friend back in Salt and watching the Marathon on the telly.  They had never seen me run in any kind of competitive race.  As I came down off Tower Bridge I became aware of my name being shouted amongst the general noise, I turned to look and there were my boys shouting at the side of the road.  It took a couple of seconds to register, but then I ran back to hug them both, together with Mandy and her family.  I was absolutely amazed and overjoyed and the boost it gave me at the half way point was indescribable.

Secondly, as I ran on towards mile 14, I thought I would have an energy gel and a little walk.  There I was happily walking down Narrow Street still smiling about seeing the boys, when more shouting alerted me to the official SMM supporters squad.  Emma shouting and Michelle recording me strolling along – excellent timing!

From about mile 20, Julie and I decided that “scouts pace” was the way to go, so we had a run/walk strategy to make sure we kept going at a reasonable pace.  At mile 25 I saw the “Refuge” supporters along the Embankment and told Julia I was going over to say hello.  Refuge is a fantastic charity and I will always be grateful to them for giving me the opportunity to experience the London Marathon. After a run of high fiving and more hugging, I ran back to where I thought Julia was but couldn’t find her anywhere, how could I have lost her in the space of 30 seconds!  I couldn’t see her and didn’t know if she was in front or behind, so I made the decision to run for the line. 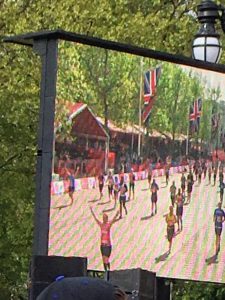 As I approached Big Ben, it started to bong and I finally realised that I was nearly home and I was running the London Marathon.  The third memory and one that will remain with me forever, is the roar of the crowd as I turned into Parliament square – it was like running into a football stadium and from that point I wasn’t going to stop and it was head down towards Buckingham Palace and The Mall.  800m, 600m, 400m – I could see the statue of Victoria come into view and then finally the “385 yards to go banner”.   I will probably only do this once in my life so, head up, eyes forward,  I ran for the line with arms in the air, full victory finish.  Unbeknown to me, my moment in the spotlight was also on the big screen outside Buckingham Palace and Harry and Ed were in the crowd to witness the moment their mum punched the London Marathon on the nose!

So that’s my story and every cliché is true, the crowds, the atmosphere, the memories, if you want it enough you can do it.

I couldn’t and wouldn’t have done this alone and the best decision I made was to join the Stone Master Marathoners.