Lanzarote Half Marathon was meant to be my first ever half. I was meant to have a whole year to work up to the 13.1 mile distance; which sounded an incredibly long way when I decided that I wanted to enter last year while holidaying in the island. I signed-up to the 2018 event after seeing runners in the days following the race wondering around in their Lanzarote marathon t-shirts and feeling the excitement still in the air.

But things don’t always go to plan. Lanzarote became my second half marathon as I was kindly given a free place from a fellow club member for the Stafford Half due to it being rescheduled. I hadn’t trained enough, but I knew that I’d at least be able to complete the course.

I ran most of the race with Sara Buckley, who had already been round the course with the 9:30 Sunday group. I thought that even if I couldn’t keep up for the whole route, I’d have a good starting point. I did manage to keep up; the water and walking breaks being a huge help. I finished in a time that I was happy with: 2:08:51. But I then had a new goal to beat in Lanzarote.

Fast forward nine months, and not enough training sessions later, to a very warm and sunny Lanzarote. A Lanzarote that I hadn’t seen the past couple of Decembers; normally it’s cloudy and breezy, providing a comfortable temperature to run in. I arrived just under a week before the race and started to get apprehensive. I went out and did a couple of shorter runs with times that I was happy with, but they were later in the day when the weather was cooler. I wondered if I’d made the wrong decision to do the half marathon. But knowing that other bats were going to be doing the same event, helped calm some of my nerves, along with the Lanzarote I knew returning the night before, as thick clouds dominated the sky again.

The morning of the half marathon arrived, and the think clouds had disappeared, but it was too late to be concerned. After hastily putting on my sun cream, it was time to go to Sands Resort and catch the free organised bus to the tourist resort of Puerto del Carmen where the half marathon was starting.

Everyone was friendly and in a good mood. It was great to see so many international competitors; I was sat next to a Dutch woman on the bus who’d come over on a cycling holiday but had decided to also participate in the half marathon. But it was also great to see our usual local competition; Stafford Harriers, Chase Harriers and Aldridge Running Club to only mention a few, and from my childhood neighbour of Leighton Buzzard too.

Before the half marathon started, we got to see many of the marathoners pass their turning point and start the returning journey. I enjoyed seeing the faster runners in action, along with supporting fellow bats taking on the marathon challenge.

The marathoners had a tailwind until turning in Puerto del Carmen, when it then became a headwind. For the half marathoners and 10km runners, it was a headwind the whole way. Despite the conditions, I still wanted to get as good a time as possible against my PB from the Stafford Half.

A drum band marked the approaching start of the half marathon. After a while, the crowd of competitors started moving forward and I realised the race had begun. I started off with a few fellow bats and aimed to keep up with them; planning to use the same tactic as I’d used for the Stafford Half. 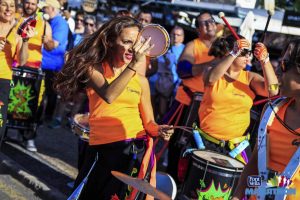 The course goes from Puerto del Carmen, past the airport, along the coast to the island’s capital of Arrecife and then finishing back at Sands Resort which is on the far side of Costa Teguise.

I personally loved the course: being able to run alongside a sea view; planes flying directly overhead as they land in the airport only meters away; seeing the city in the distance and reaching it quicker than expected. However, the ground is tough and hard on the knees and legs; roads aren’t as level as we’re used to and some of the race is run over cobbles too. The wind made it harder, but at least it was there to keep us a bit cooler.

There were pacers for the event, but they started at the very front of the pack and seemed so far away from us at the beginning (which should have been a pre-warning that the event was going to go off gun time only). However, within the first couple of miles I managed to easily catch-up with the two hour marker. I stayed near him for a while but, despite the strong start, I slipped behind as we started to enter Arrecife.

I didn’t get frustrated about my pace though. I’d been looking forward to this race all year and I wanted to make the most of running in the sun; in racing vest and shorts in December, along the sea with a breeze keeping me cool. I’d already run nearly half the race without stopping or walking; I aimed to just keep going.

I caught up with a couple of runners from Aldrige who I started chatting to and fell into their pace. A while later, they’d fallen behind to walk and take gels, but I continued running; despite not feeling too well from drinking on the go.

We were approaching Costa Teguise; the final stretch and the paths that I’d trained on. It was nearly in the bag and my watch was showing that although I wouldn’t be near two hours, I was still going to get a PB!

As we came back towards the sea for the final time, I noticed my partner among the spectators. He’s been very supportive of my running ever since I joined the club in July 2017, but he’d never been out to see me race before. It was great to see him there and made the finish feel all that bit closer.

The final run around the sea and into the town was a relief; counting down those final couple of miles. When approaching the final bend, a bike bell was ringing; the cyclist rushed past and the first of the 10km runners was in toe, sprinting towards the end.

Finally, the finish line came into sight; or should I say the first arch of the finishing stretch. On seeing the arch I started to speed-up for a final push, to see that there were around five more huge arches behind it. I kept going; pushing through for the best time I could get.

There were congratulations from other bats as soon as I got into the runners’ area and I enjoyed seeing the rest of the club runners finishing (along with receiving the event medal, which is a nice big, heavy one). 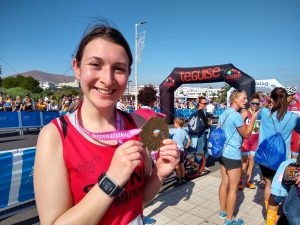 When everyone was over the line and the event had finished, it still wasn’t really the end. It was brilliant to be able to socialise with club members that I knew and hadn’t met before, over dinner and drinks for the next couple of nights. It really showed me how welcoming our club members of all different abilities are.

A couple of days later, while waiting for my flight back home, I got an email from the event organisers. My official time: 2:07:39. Not quite the PB I’d been hoping for but still a PB, and hopefully sets me in good stead for the races of 2019.