Entering – like many others I’ve previously put in for a ballot place and got the commiserations e-mail and magazine.  I was so close and yet so far last year when I got club reserve place, but bar tripping my successful fellow bats up, which I thought might be frowned upon, it wasn’t meant to be.

Again l entered for VLM 2019.  In October, I was sent a photo from my brother – 2 magazine covers – one saying ‘Commiserations’, the other ‘You’re in!’ I didn’t know who had got in, was it Dave or Dawn?  Well, it turned out to be Dave who had got one of the bequest places.  Dawn decided to self-fund a charity place with Whizz-Kidz and I was so happy for them to be able to experience the marathon together.  Again I got the commiserations email and magazine so entered the club ballot.  I wasn’t expecting anything, but to my utter surprise and delight was drawn out first.  Amazing! – It was meant to be, us all going to London together…

Training – well, training plans were a new concept for me, I’d usually just turn up and hope for the best, my aim just to finish, but this time I didn’t want to let SMM down.  I looked at the various plans and tried to train when I could, or was supposed to.  I worried that I wasn’t training enough, I worried that I was out too long on Sundays as I really only had that day to fit in longer runs and everyone else seemed to be doing so much more training than me.  I decided to run Knighton 20 as training but I found it difficult, even with Steve pushing me every time I tried to walk, and the weather was unforgiving.  There was no way I could have completed another 6 miles on top of the 20 that day… I went out a few times on my own, making up routes as I went.  Migraines plus sore ankles and hips stopped me training on a few occasions when I should have done longer runs.  Was I ready?  Probably not, but my focus was to go there, plod around and enjoy the scenery on this ‘once in a lifetime’ experience I’d been given.

Fast forward to Marathon Day – I met Dave, Dawn and Anne early at the tube station and we followed the crowds of runners to Greenwich.  Dawn and Anne went on their way to the red start. Myself and Dave went to the Blue Start.  Our Supporters – my husband Rob and Anne’s daughter Jenny went to take up their positions on Narrow Street.  Dave then left to go and get in his zone. Then that was it, I was on my own with nothing but my thoughts and a long wait.  I wasn’t due to start until 10.48, way after all the ‘faster’ runners had gone, and just before the bulky fancy dress entrants were told to start.  I scoured the crowds for signs of any other bats, but unfortunately couldn’t see any.  Someone else from Stone (small world) saw my SMM top and wished me luck – I wished him luck back and, never to miss an opportunity, encouraged him to join SMM (so watch this space.)  I crowded into my allocated start zone, shivering from the cold, and then all of a sudden I was at the front and off, high-fiving the commentator who gave SMM a shout out as I left.

And then I ran… 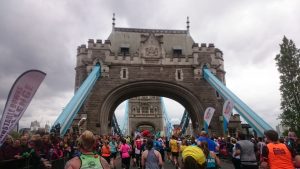 The Race – I was worried about it being too crowded to run at the start.  It wasn’t.  The atmosphere was electric and I got swept along in the excitement.  From the start the crowds were wonderful. The streets were crowded, people standing on their doorsteps, playing music, bands playing, everyone cheering and encouraging, shouting out to everyone who had their names on their vests (note to self, if you ever get the opportunity to do this again, get your name put on your vest.)  The first few miles past, and we filtered in to the runners from the different coloured starts.  I began to look out for Dawn and Anne who were meant to start slightly before me, on the off chance I could catch them, but no, I was on my own.  I settled in to running.  I was running well, and feeling good.  I passed the Cutty Sark.  I kept telling myself, just get to half-marathon and you’ll be fine.  Tower Bridge came in to view – wow, I’m running over Tower Bridge, how amazing is that?  My next aim was to get to mile 14 where Rob, Jenny and the Bat support crew would be… I scoured the crowds but I couldn’t see anyone.  I thought I saw Rob in the distance, I waved, but it wasn’t him.  Don’t stress, just focus on running.  Then, out of the crowds I heard Rob shout my name; I turned, nearly tripped, but still couldn’t see him.  I was disappointed I couldn’t see him but to know he was there supporting me spurred me on.

I pushed on.  Throughout the run I’d had the blue 5 hour marker first behind me, then in front as I attempted toilet and water stops.  I began to believe that perhaps I could do the marathon in 5 hours… I lost the marker, I thought she was behind, but no, she was in front.  Panic set in.  I told myself to calm down, it didn’t matter what time I did.  I kept on running and managed to get in front of her again.  I was still looking out for Dawn and Anne as I ran.  As the run went on, being a slower runner, I found I had to concentrate more as people would just stop in front of me to walk or stop for water, when I saw a gap to get through it would suddenly close in front of me.  As I ran through the Lucozade stops, the tarmac was so sticky from the spilt juice of the thousands before me, it felt like it was trying to stop me in my tracks, but still I ran.  I approached mile 21, the next chance to see our supporters.  Again, I scoured the crowds not being able to see anyone. 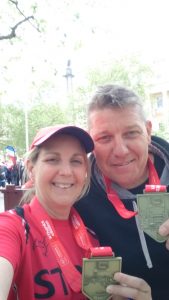 Then a hand came out of the crowd and Rob high fived me and I heard Jenny shouting, well done Helen, keep going!  5 miles to go, perhaps I can do this… 3 miles to go, I was tired, still managing to keep to the same pace but wanting to walk.  I started to calculate in my head, if I walk for the last 2 miles, what would my time be? No, I told myself, you can’t walk, keep running.  How had I gone from thinking I’d just plod around enjoying the scenery to being a running machine that could possibly do a marathon in less than 5 hours?  Just keep running… I saw the London Eye then Buckingham Palace came in to view.  I so wanted to get my camera out and take a photo of that, the Mall and the finish line, but I was on a mission.  I looked at my watch and decided 4:58 was my aim.  I ran and I ran, 800m to go, 400m to go.  Someone dressed as a teddy bear was by my side dancing his way to the finish line effortlessly. And then I was there, over the line in a daze, 4:57:09.  I’d knocked a whopping 1 hour 12 minutes off my 1st marathon time in Cambodia and I’d got a lovely shiny medal!!!  Dave was there waiting for me after the finish (of course having ran the marathon, gone back to his hotel, showered, changed and got back to meet us!)  He’d done brilliantly well, 3:31:43 and I was so proud of him.  Anne and Dawn came in together at 5:34:56, Anne putting her London Marathon ‘demons’ to bed and Dawn managing to run despite grazed knees from her fall the week before and a dodgy foot.  Incredibly I’d managed to pass and miss them on the course, but they said they’d met Andy along the way.  We began to hear how well all of the other Bats had done and I’m super proud of us all, and everyone else who achieved or even attempted to run, walk or crawl the marathon.

What an amazing day.  I was so happy to have experienced such a wonderful event.  If you ever get the chance, please do it.  Don’t worry about thinking you can’t.  Just over 3 years ago, I’d never run before.  I’m not going to lie, 26 miles is a bloomin’ long way and sometimes it hurts, but the crowds of supporters help you on your journey and when you look back on your achievement it makes you feel amazing.  Just tell yourself you can do it and go out and enjoy the experience.

Thank you SMM for the opportunity. 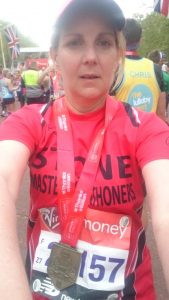