It has been said many times that, ‘running a marathon is not just about the race itself’ and now I would like to offer my perspective upon that belief…

2016/17 saw me training throughout the winter in preparation for the Manchester Marathon in April 2017 only to be scuppered by injury one week before the race and having to pull out.  2017 proved difficult both physically due to a herniated disk and mentally due to the frustration of not being able to run as I wanted to for the majority of the year.

In October 2017 I joined Stone Master Marathoners (SMM) after treatment for a herniated disc gave hope that I could get back to some sort of resemblance of the runner I was prior to injury (although that was not great shakes).

May 2018 saw me run over 100 miles in a month since March 2017 and this was followed by 6 more successful months of 120 plus miles all pretty much pain free.  Looking back, these 7 months of solid mileage provided the groundwork prior to undertaking a marathon training programme.

With no real intention of running a spring marathon in 2019, I was fortunate to gain a free place for the Manchester Marathon in April 2019 via the SMM club ballot after being ineligible for the Virgin London Marathon (VLM) club draw.  I was more than aware that there were a number of my fellow club members who would love to have been given this opportunity, therefore, I was going to give it my best shot which meant trying once more to achieve a ‘Good for Age’ time for VLM 2020.

December 2018 through March 2019 saw a 16-week training programme running 5 times a week and up to 170 miles a month.  Now I have always believed that I am quite a social runner in that I get just as much out of the social aspects of our great sport as I do from the actual ‘running’.

Training for a marathon saw me become very selfish with my time and running, this was possibly the most difficult aspect of my training plan.  Having to turn down the opportunity to join the Sunday club runs because the plan says 16 miles with the first 8 miles at 08:40 pace and the second 8 at marathon pace.  Whilst I attended many of the Thursday tempo runs, I ended up doing ‘my own thing’ as the plan ‘says so’.  The actual ‘being there’ on the Thursday’s helped tremendously as I was able to get some of that social aspect I love and I knew everyone else was ‘suffering’ along with me.

Race day seems to come upon you even though you have been aware of the date for months and those last couple of weeks when you start to taper see the doubts creep in, ‘have I done enough’, ‘what if I blow up again at mile 20’ (previous experience), ‘I will let everyone down’, ‘I will let myself down’, ‘the end of the world is nigh’, ‘Vale are going to get relegated’, well maybe not the Vale one but you get the idea! 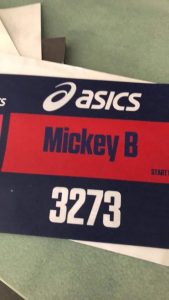 Race weekend sees me miss my beloved Port Vale at home to Crewe Alex (biggest game of the season) as I travel up to Manchester on the Saturday before the race to get myself acclimatised or because your wife and friends see it as an opportunity to get a few (that should read ‘many’) beers down their necks as payback for coming with me (really!), you decide which one.

Sunday morning – porridge pots, hydration and oat biscuits along with nervous toilet visits prior to leaving the hotel.  My good friend Mark Owen, my wing man at my last marathon meets me in reception before we walk the 2 miles to the start.  Leaving the hotel finds perfect weather conditions and after initially starting to walk in the wrong direction (does anybody know how to follow Google maps?) we see other runners going in the other direction and decide they probably know where they are going.

I love runners because regardless of how short a period of time you spend with them, they can always chat for England all things running so the two locals we ask directions are soon chatting with us like we have known them for years.

A quick meet up outside Old Trafford with fellow ‘Bats’ for the obligatory team photo sees everybody else has the same anxieties and now I know for definite that the world was truly going to end.

Now for those who have not done Manchester Marathon, the start area is very clearly marked unless you are panicking over all sorts of nonsense then you haven’t got a clue where you are going.  My advice would be take a responsible adult, thanks again Mark Owen.  Once in the start pen the excitement / anxiety starts to kick in, the doubts return along with the nervous urinary and bowl systems.

It was strange, all the nerves disappeared and I became quite emotional, thoughts drifting about those who have supported me, the training runs both good and bad and the end goal, that elusive GFA time.

The first couple of miles saw me getting settled into my target pace of 07:35 knowing that if you get carried away now I would surely suffer later in the race.  Between miles 3 and 4 I could see a fellow ‘Bat’ about 100/200 metres in front and at first I felt myself speeding up to catch him for a chat until I noticed my pace had shot up so I relaxed and put the idea out of my head.

The next 6/7 miles saw a settled pace and an opportunity to chat to my fellow runners.  The fireman based at Stone fire station using the marathon as a way to achieve a time for Boston (USA), the young Glaswegian lady who was completing her second marathon and hoping for a 3:40 and the 3 Congleton runners wishing me luck.

Miles 12/13 sees runners loop back on each other which provides an opportunity to look out for fellow ‘Bats; both quicker and slower than yourself.  Seeing our familiar red shirt approaching certainly gives you a lift.

Just past the half-way point sees me catch up with a ‘lonely goat’ Ian running in his boxing gloves and headgear.  We run and chat for a while and this can be dangerous, not the chatting but the running with someone else as you either end up going too fast or too slow, be warned.  The support the crowd gives him is tremendous and infectious, cheers of ‘Go Rocky’, for the 100th time boost him and those around him.

Miles 20/21 sees the quietest part of the course just when you really need a boost as fatigue can start to creep in.  Mile 20 sees me catch a struggling ‘Bat’ and despite the feelings that you want to slow and support your fellow team mate the selfishness of the marathon runner kicks in again and off you go after a brief, ‘good luck’. 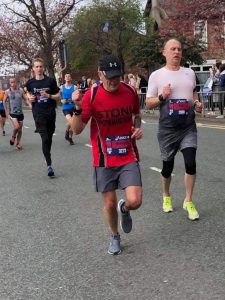 Now for those of you who know Matt & Caroline Davies you will be aware of their uniqueness and their unequivocal support for their fellow ‘Bats’ so seeing them along with Bonnie Seabridge at the quietest part of the course was such a boost.  I can only imagine what other runners thought as they could hear them shout out for each and every one of us– love you guys.

Now the difficult part of any marathon those last few miles and again it was the Bat army that pulled me through.  Now I’ve not mentioned them before but our amazing support kept popping up all over the course so massive thanks to, Bill (at the start), Anna, Joanne, Fiona, Kirsty, Nia, Aggi and Rozzie and not forgetting the Pom Pom girls Alison and Michelle.  To see familiar faces throughout the course and especially at mile 25 when cramp in my right calf started getting the better of me really spurred me on – Thank-you.

The finish line was fast approaching, no scratch that the finish line never approaches fast especially when your watch tells you that you have completed 26.2 but you are still 200/300 meters from the finish.  Those last nagging doubts hit, will I make it, what if I cramp up, the world is going to end but none of these materialise (even Vale aren’t getting relegated) and as I cross the finish line it’s one last check of the watch 3.18.11, just under the cut off time of 3.20 for a GFA time and a lovely new PB – now where do I sign up for London?! 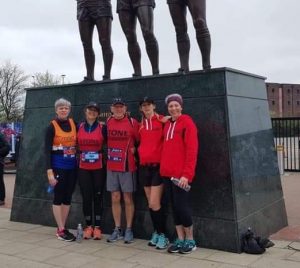