My brief was to submit a report from the Cheadle 4 – such is my organisation and the relentless NSRRA season that I find myself writing this straight after the Trentham 10k.

It may have been World Cup Final day in Brazil – but first the serious business of the 12th round of the NSRRA season! This was a race I had not done before which always adds an extra sense of excitement and trepidation.

Me and the future Mrs F headed out pretty late (by way of tradition, superstition, or sheer laziness this has become my usual pre-race prep!) and arrived at the course about 10 minutes before the off. This leaving no time to warm up & just enough time to register for the race – but I was feeling good having ran a sub-20 PB at Hanley Parkrun the previous morning. 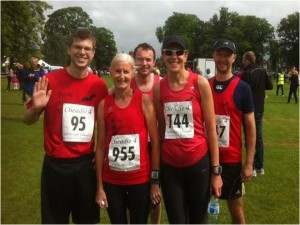 I managed to meet up with Paul Phillips and Paul Lee to gauge the ideal tactics for this short but demanding course. They both seemed pretty confident (as they should be given their Wednesday club run speed!) Conditions were dry but windy and we were wondering whether it would work in our favour or not! Joyce, John (hiding) and Anne-Marie joined us for a pre-race photo. Anne and Bill were spotted in the distance warming up & attempts to shout Pam & Mac failed as they wandered over to the start – sorry guys! Special mention to Anne-Marie who was using the warm up for another race in the afternoon!

I have regularly been coming 3rd in my Group D category this year, and I spotted the 2 quicker guys at the start line. Rather than the standard approach I take – to run my own race and see where I am with a few miles to go – I decided I would go with their pace and see what happened today. This was not the best decision as they both rattled off a sub-6 min first mile and I clutched on to their tails about 10 seconds back! It’s always great to spot Bill during the race and get some much needed encouragement. He shouted that I should be pushing even harder at this point as it was about to get hilly!

After 1 mile of mostly flat, slightly downhill, we reached the bottom of a hill which then climbed up to about 2.5 miles. This part being the reason the race exists (we love a challenge!), I set about climbing up at a much slower pace – I clocked mile 2 at 7:45 pace and I slowly saw my NSRRA competition get further away. The hill deceptively levels and then proceeds to climb again through a wooded area as you start to tire.

At this point in the race I often find myself around the same group of runners which is both comforting (you know you’re on a sensible pace) and a bit rubbish (they know your tactics!). Special mention to Dave Ford (Newcastle) and Sarah Wilson (South Cheshire) who run well and always have a few comments! 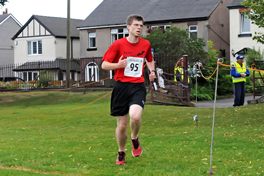 At the top of the hill you start heading back to the finish which I was pleased to find was nearly all downhill. And what a downhill! This set me up for a consistent mile 3 at 6:24 and mile 4 at 6:23. There was still a bit to do in mile 4 and I was definitely tiring but the finish on playing fields offered a good chance for a sprint finish. Unfortunately I was not close to anyone so I rather limped to the finish. The man on the tannoy called out Michelle in front of me as 2nd Lady home which got a good cheer and I crossed the line in 26:33 – just the 18 seconds behind my NSRRA competition – so will have to try different tactics next time!

Paul Lee and Paul Phillips had been pacing each other round with the Group E top spots up for grabs and both finished sub 29. Paul Phillips in particular with a good sprint finish battle which I think he won although there may have been a problem in the funnel at the end!

Everyone I spoke to afterwards seemed really happy with their times (viewable on this website now!)

Overall it was a race that was well organised, challenging and rewarding – but ultimately a little bit short. We don’t get any other 4 milers so it is a chance to practice that middle ground between the 5k and 5 mile, but I reckon there is the basis for a really great 10k+ course there!

Roll on Trentham 10k (Over to Paul Lee!)