Time for my third race of the year, St Michaels 10k. As it’s organised and marshalled by Stone Master Marathoners everybody knows it’s going to be a good race. This year it’s another sell out so 600 people racing, I can’t wait!!! 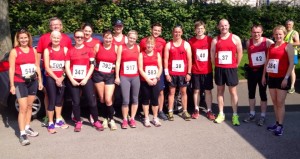 The weather has been good lately and I think everybody is hoping that on race day it won’t be quite at hot. As usual the kids wake me up at 6am, I peer through the curtains and not a cloud in the sky – it’s going to be another scorcher!!

After running a PB at the Stafford Half and Shugborough relays I was hoping for a good time and adopted the same pre-race routine; a couple of rounds of toast, strong coffee and a gentle jog to the start line. It’s just become clear how hot it’s going to be.

Arriving at St Michaels school I soon see lots of red vests and we meet up for the customary photo. Off to the start line, I cross the road to take a photo to upload to twitter and we were soon called to the line. Mick joins me and I find myself standing at the front and I don’t feel too comfortable but it’s too late to move. I discuss tactics with Mick and I want to take it easy first lap because of the heat and then 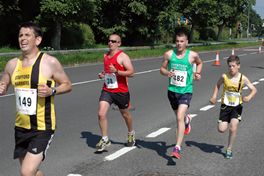 see how I get on for the second lap.

The next thing I know we are off and I am feeling ok, I have a quick look around after the first kilometre and Ben Gamble is about 50 yards ahead of me, I am surrounded by NSRRA ‘A’ runners and about 15th position in the race. Now I don’t run with a GPS watch I just run on feel and at this point I should be thinking that I am going too fast, slow down and run to your plan. But no for some reason I carry on “madness in the heat” as I get to the end of the first lap the wheels finally fall off. I spend the second lap going backwards but the great local support, including my family, and support from the marshalls thankfully got me round in one piece. 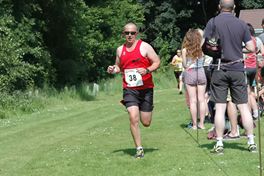 After the race there was the chance to watch the other runners finish and talk to the rest of the SMM team about their races. It was great to see so many from the club running: in total there were 20 SMM runners.

I big thank you to Chris Barlow and co for organising another fabulous event.