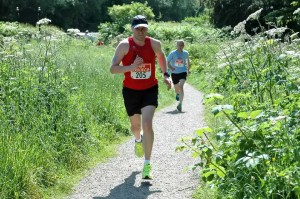 This years Westbridge 5 saw a slight change from previous years. As the club took a step back from organising duties to concentrate on arranging the Flying Fox marathon up stepped our local celebrity running couple of Mr & Mrs Gamble to take on the task of not only organising a race but also raising funds for UHNS Neonatal Unit at the same time and it’s fair to say they did a bloody good job of both tasks………

This was the first time I’d ran the Westbridge 5, having marshalled on a few occasions in the past it was time to run it – mainly down to the fact it was also Race Day 8 of the North Staffs Road Runners Association series.

The day itself didn’t take the usual laid back preparation I generally have before a race – there was a bit of running around to do even before the start as I had to make a journey to drop my Son off for his cricket match at Moddershall before getting back to Stone and then making the return journey to Modd (hopefully before play had ended). With the sun blazing the weather on the day certainly seemed more in tune for a relaxing morning watching cricket rather than doing a 5 mile race but there were NSRRA points up for grabs so with both myself and boy sun creamed it was off to Westbridge.

After parking I was introduced by Tim to his nephew – 20 years my junior – “this is David, he’s just done Edinburgh Half in 1:26 so it should be a good race between you two” Cheers Tim, not only am I racing against the others in my NSRRA group but I now feel obliged to attempt to beat your nephew as well! 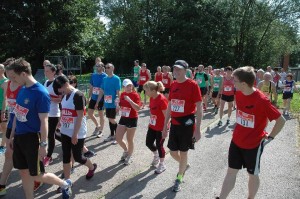 The race started and off we went – at least the sun had mainly dried out the field at the back of Westbridge Park although there were still a couple of soggy areas – round Westbridge and out onto the canal. We took a pretty quick start going through the first mile in 6:06 and as we dropped onto the canal the heat started to hit me (I’m not the best runner in heat) I could feel my legs get heavier as we headed towards Aston and David disappeared into the distance – miles 2 & 3 got progressively slower 6:28 followed by 6:42 up the bit of a slope to join the A34 where Tim & Jim (what a comedy double act!) directed everyone right back towards Stone, although they did try to turn me left?!!

As I headed along the straight road back I could see David about 30 meters in front and thought this is my chance to close the gap, when I turned off the A34 to head back into Aston I’d closed to within 10 meters, however I was feeling it again by this stage and by the time we were rejoining the canal he was again about 20 meters in front….. Bloody youngsters! As I approached the last mile it was time for one last big effort, the gap seemed to be closing again and within half a mile I was up level with him and could see 2 Group C runners in front as well, time to really dig in – as I went past David he commented that he was done for. Onto the ‘C’ runners….. However, despite my best efforts and a last mile of 6:25 I just could not reel them in and it was a slightly disappointing 5th place in my category – I blame it on the sun. But I could head back to the car knowing the Mars bar from my goodie bag was waiting safe from the sun in the compartment between the front seats…………. The one I’d left open with the Mars bar in full view of the Sun!!!!!! Not so much a chocolate bar now, more a chocolate drink.

14 other Stone Master Marathoners raced and decent points were picked up again by our NSRRA contingent along with some PB’s along the way – a great effort in the heat. 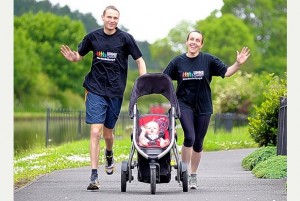 As for the main race our local man won his own race comfortably – I did take the opportunity to mention to him how rude it was to invite all these people to his race and then win it himself – although his excuse was he was under strict instructions from Mrs G to make sure he won it, so I guess that’s fair enough. All in all a great race organised for a great cause and I reckon I’ll be back to race again next year.