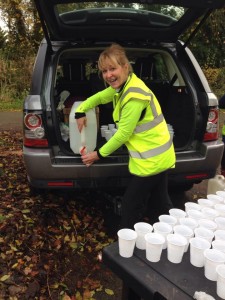 The day of the Flying Fox started out a little grey but at least it was dry, not too cold and conditions seemed good for the runners. I had offered to help out on the day doing whatever I could so finding Brian at the school at Standon he quickly put me to work on the 200 plus goodie bags that needed putting together.

There was a hive of activity John and Joyce Edwards, Anne Griffiths and one or two people I didn’t know being relatively new to the club, but we were soon done with a brilliant line of production.

In good time Anne Griffiths and her daughter Jen and myself set off to the 6 Mile point where we were to man the water station which was at the top of the , in the words of Julie Ebrey the killer bank.

The table with the water butts was all ready and set up for us but we felt we didn’t want to run our of water so we set about knocking on a door with an outside tap. They were delighted to help and said help yourself to whatever you need.

Having to wait for water wasn’t on the cards so we set about filling the 200 cups, to be prepared was the order of the day.

We did lose a leg from the table at one point just managing to avert disaster, I don’t know what Anne did but she wedged into place phew.

We were ready now and waiting to see the first runner plough up the steep hill . 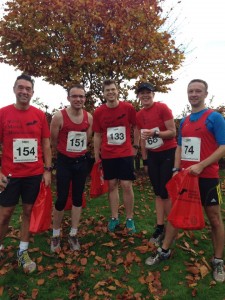 At just after 11 o’clock the first runners were in sight it was lovely to see them, Richard Fain was the first bat to come into sight our red shirts do stand out well. I think we were a welcome sight to the runners everyone was very grateful and thanked us which was not the easiest  of tasks, as I don’t think I would have been able to speak had I ran up that hill.

We were soon made aware of some slight confusion via the runners that the route was a little unclear so Anne  ran down there to marshall.

The runners were coming through thick and fast but Jen and I coped well and everyone that wanted water got it.

A guy from Trentham RC who was out for a Sunday  morning run came over and had a word with us he said he had run his 8 miles and was going to stay with us and watch , but we soon had him marshalling at the top of the road where the road went to the left . Bless him he was there for a good hour before he set off again for his run back to Stone . People are so kind sometimes.

Bill was soon in sight as the back marker so we knew our job was done and we could pack away and head off back to the school to see how everyone had done.

It was a great day lovely atmosphere and all the SMM were all safely back with some good times too. 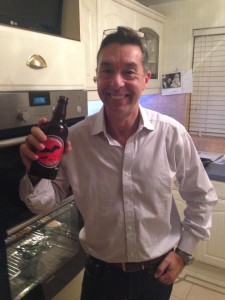 Pam and I arrived in plenty of time for our first Flying Fox 10 mile but still found plenty of runners already there. The parking was clearly marked and marshalled with ample places. The short walk up to the school provided time to build the nerves especially seeing Richard Shaw hiding a half buried skeleton which I hope was left over from Halloween and not a previous runner. A waft of cooking bacon pulled everyone in the right direction but the real gastronomic highlight came in the form of the beer from the goody bag. We met a few bats at the school; Clare Irving and Samantha Cowap were raring to go with Clare nervously seeking a pre race banana which she had couriered in, to much relief. Pam then went off to fulfil her marshalling duties.

I sort out some more bats during the jog to the start line and congregated with Richard Fain, Paul Lee, Fabien Carbonell and Paul Phillips hoping some of their pace might rub off on me but I was disappointed if not surprised to see them shoot off into the distance so decided to run at a steady pace saving a bit for the dreaded hill which I had been fore warned about.

The marshals were amazing it’s the first time I have ran a home race, and to get a great cheer and my name shouted from a marshall is very uplifting and certainly made me try harder . The bank was indeed everything I had feared and the welcome sight of my wife at the water station was a relief but he bank still carried on a little further. The rest of the course was ok for me with the downhill sections a chance to pick up the pace but I began to flag at around 8 miles and Richard Shaw sped past me soon after but I gritted my teeth and finished in 83 mins 12 just ahead of Anne-Marie Mountford in 83.33.

It was a fabulous day an event the bats can be proud of.