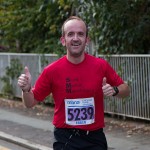 This was the very first edition of the ‘Metric’ marathon in Chester which consists of running 26,2… kilometers instead of Miles, equivalent to 16 miles.

I was quite enthusiastic about it because an injury developed around the Normandie marathon in June had compromised my running plans for the second half of the year : I had to take a couple of months ‘off’, when I replaced running by cycling in order to recover but also satisfy my exercising needs. I must say that cycling really helped to keep fit and compensate for the lack of running.

It was a very chilly morning, and an early start to make it to the Chester racecourse on time before the 08:00 deadline when the carpark was closing. Once there, it was only a 2 hours wait!
I had a stroll around the field to suck in the atmosphere. It was a strange feeling seeing all these runners preparing for the full marathon, because I was there just a year ago! The full marathon started which was also strange to see a race start and not being part of it. Just managed a wave and a cheer at a colleague from work then fellow club member Tim Hulse.

Another hour to wait then my turn! The field was ever so quiet… The time came and about 500 runners got to the starting line, which wasn’t bad for a first edition of a race. 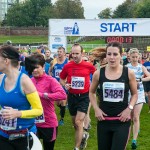 I took a slow start to warm up and stayed above 8:30min/mile for the first couple of miles, passing through the city. The next 2-3 miles were quite uneventful, then we got told to swap from right to left hand side of the road, which was divided by cones in the middle. We passed a couple of police motorbikes which were opening the road for the runners from the full marathon, closely followed by the leader : this was a fantastic opportunity as you don’t tend to see any of the leaders while you’re struggling at the back of the pack! 2 to 3 minutes later the 2nd and third runner appeared, followed by more runners and then the 3hour pace runners : it must have been the first time that I was running a race while applauding & cheering at runners from another race!

Mid race is when we joined the marathon route & runners which by then were on mile 20, and we all returned towards Chester. At that point of the race, I was averaging 7:45 to 7:50 min/mile, which matched the marathon runners at that point, so there was little movement between the 2 races. It kept me going and motivated, especially when some marathon runners started to overtake and I had to get myself thinking that I had 10 miles less in my legs! The support which had dwindled away in the middle of the countryside started to reappear and when we reached the town centre there were loads of people cheering us on. We soon reached the racecourse and the buzz of the finishing line, and another opportunity for the commentator on the microphone to struggle, then make fun out of my name, which he also did last year. 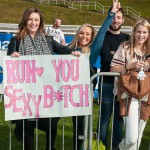 As a race, it was very good, as usual the organisers have got this licked : easy parking, loads of information, regular & well kitted out drinking stations, and new this year your results by text mid afternoon. Crucially, I felt that both races met spot on at the right time, with participants running at a similar pace.

The 16 miler distance for me at this time was perfect, just what I needed to get me back to competitive running while recovering from injury. However, I think it should call itself a different name and not include the word ‘marathon’ as it sounds like you’re doing a normal marathon. As a conclusion, that race was a bit like some kind of a ‘sweetener’ marathon : half the stress at the leading up to the race and the start, but unfortunately only half the endorphins at the finish…