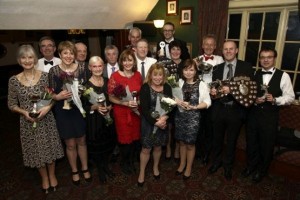 STONE Master Marathoners held their annual awards night on Friday at the George and Dragon, Stone.

Anne-Marie Mountford was the evening’s big winner, taking the coveted Runner of the Year gong, as well as being crowned top North Staffs Road Runner Lady and Most Improved Lady, and picking up a fourth award for being second Group A lady.

Mick Downes was her closest rival as he was named Male Champion for 2014, as well as picking up the Veteran Male and Marathon Male awards.

Pam Davies was the Lady Champion, and also claimed the Veteran Lady award, while Bernie Priekulis – recently a nominee at the Sport Stafford Borough Awards – was named Club Person of the Year, as well as lifting the Chairman’s Cup.