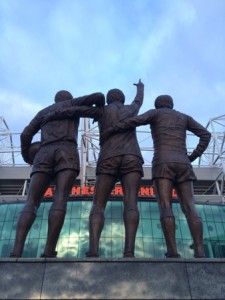 Having run the Survival of the Fittest obstacle race a couple of times around the Etihad Stadium and velodrome (Man City), it felt like the right thing to do to run an event based at Old Trafford. I registered for the 2014 event but needed to defer which the organisers accommodated for a small admin fee.

I’d assumed it was a new-ish event and had heard that it had recently had a bad year that some of the club had experience of (2012 I think – wet baggage, organisation and steps at the end?). The blurb though indicated that 2015 would in fact be its 39th year and in 2014 it scooped awards for ‘most improved race’; and ‘best marathon’. So indications were good.

I wasn’t with the club when I enrolled and am training for longer distances this year but as the 19th got closer I began to feel the pressure of its being marketed as the ‘UK’s flattest, fastest and friendliest marathon’ – I’d have to give it a good go.

The football fans amongst you will know that there are a few pop-up car parks around Old Trafford that will charge £5-10 per day and the stadium is well served by public transport. The organisers allow you to book I advance the Man United car parks though so I did that for ease – it was £10 and was park N2 right next the stadium, village and finish-line. I’d recommend it, especially if lone-running. I got there for 6am but people were landing at 8am so if you are staying locally or are willing to take a risk on the M6, you could arrive later.

The event village (car park E2, M16 ORA) was superb with huge marquees for baggage, eateries, etc. and I’ve never seen as many portaloos at any event I’ve been to (these things matter). The beauty of the car park was being able to leave kit in the car though. I don’t think they catered for valuables like mobiles/keys, which felt like a gap given all the other services offered. The scores of marshals, cadets and volunteers were very friendly and couldn’t do enough for you.

Not having run in club colours since a teenager it was nice to hear someone shout ‘Stone!’ at me a couple of paces into the village. Turned out to be five friendly Newcastle runners; and during the race did a thumbs up with a Trentham guy and another in a Michelin vest that feels like Trent Vale but I don’t recognise yet? 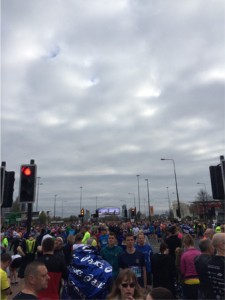 The muster for the start was different – there wasn’t an obvious voice directing the herd and the time-based colour pens weren’t pens like the Great North Run, but signs you kind of stood by until the off. It was a little bit confused at first. I’d been allocated to the second last group and was worried about how to get towards my pace group. The benefit of loose waves though was that we could edge up – there were people in the forward groups edging back at the same time.

Too far from the front to hear Ron Hill pull the trigger, we relied on a tannoy to relay that we were off. The next task was to spot the pacers. Running with big flags ranging from 3hrs to 5 hrs they were good visible targets. The blurb asked that you book online beforehand – I tried but couldn’t work out how to, so was easier to aim for the flag. Key bit of advice I’d give is to not forget like I did that if you are chasing a pacer in a wave ahead of you, you actually put yourself ahead of that pacer because you have caught them up. Steve Parker gave me some great advice to hold steady for 16 then give it some towards the end. That was my intention but chasing the pacers meant I pretty much got sucked into moving forward and did the reverse, which I wouldn’t recommend – it hurt in the last third! Another peculiarity is that with 15 minute interval pacers, there appeared to be a 3:15, 3:29 and 3:30 all this interval apart which didn’t compute. 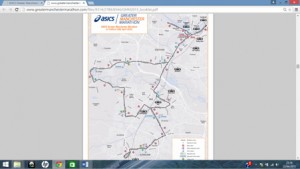 The course involved a bit of out-and-in with two loops, one around Altrincham; and the other around Sale. Once away from the start the running was very residential with occasional town centres which felt very similar to the mid-section of the Great North. It quickly became striking how flat the course was. I’d not noticed before but hills do gently help regulate pace and their absence seemed to make for consistent running which could trap you if like me, you went out too hard. I counted five ‘bits’ of gradient all the way around that any of the club runners would take in their stride. If though you wanted to break yourself in, there was an option to run a relay in teams of two and four which appeared to be really well marked – it is a very accommodating event.

Support from the public and marshals really was second to none with bands and choirs that you would like to stop and enjoy, but had to keep moving. The numbers had your name on so you’d get shouts from all over which make a difference. There seemed to be sweets and water offered very regularly indeed. There was a gap around salt-based stuff though. I think there were two stations that gave isotonic drinks – I caught the last one just after the body started moaning at mile 22. I’m not a big drinker during a run but would take a salt supplement with me next time. Mile markers were there the whole way round and matched Strava well (if you use it).

Got to give huge thanks to Tim Hulse for his support, shout out and kind write up – really made a difference at miles 4 and 19. Great run by Elaine Hulse too.

Things went a bit wayward 21-25 as you expect. There was a little bit of countryside where things went very quiet then what felt like a long straight road in. I think it was at 25 when you could see the footie stadium again which was a good magnet. The road kinks a bit (still flat though) so you lose sight of it but the main supporters start at this point and the end seemed to come really quickly.

The finish was slick and very well supported – someone seemed to check each of us as we crossed to check welfare then it was on through the reception area. The sponsors were Asics, MyProtein and Erdinger so the offers were a foil blanket, cups of whey protein and then beer (with no alcohol in – never had it before but was ok). Goodie bag with nice T-shirt and huge medal as they all seem to be at the moment. The vast majority of finishers appeared really happy with their times – and about how they had qualified for other events on the back of this race. I’ve done a few events with RatRace over the years and tripped over one of the partners who blew up half way, walked a bit and still finished in 2:42 which reminded me that we only ever compete against ourselves!

It was a really well organised event that did feel friendly, if a little ponderous before the start. Would strongly recommend if want a qualifying time or PB and could be a good first marathon if like me, it was your first. Flip side is your time in pretty much any other race you do – be it Potters or London is likely to be slower. A lively event that felt more like a half than a full, I’d recommend giving it a go. 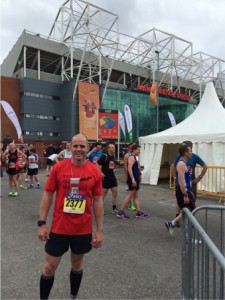 The organisers, Xtramile events (xtramileevents.com) also do a range of endurance events, triathlons mainly, so after you’ve done the marathon, you may get tempted to have a look at some other disciplines while you are on. Hope this of some use, cheers.