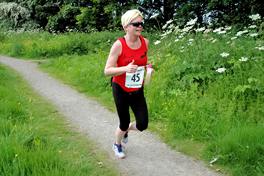 I arrived at Westbridge park by the Scout hut just after 9am, there were lots runners from different local clubs, the run was well attended, some very familiar friendly faces from the Spring Treble. The use of the Scout hut was brilliant and meant there was somewhere to leave bags and the always required last minute dash to the toilet facilities.

The start of the race was well organised with all runners making a dash for the field at the top end of Westbridge. The run was a single lap of the field and then onto the river. The support from the marshals and spectators was amazing with constant cheering and shouts of encouragement. The run then left the river at the bottom of Westbridge along the road and then re-entered Westbridge all the way back to the top by the Scout hut and out onto the Canal.

It seemed a long way and was very hot along the canal as there seemed no air and no shade from the sun, God I was glad to see the exit at Aston. The run took us around the picturesque lanes of the village. All around the village there were plenty of marshalls cheering and supporting the runners. 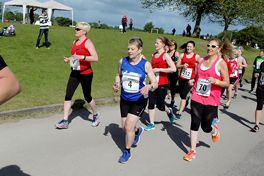 Then exited Aston onto the A34 there was finally air as we had a nice breeze to cool us down slightly before re-entering the canal for the final stretch to the finishing line back at the Scout hut at Westbridge.

A good all round, all terrain flat run well organised and supported by spectators and marshalls. A brilliant goody bag to boot with a bottle of the famous ‘Flying Fox’ beer, and a chocolate bar and packet of crisps for the children.