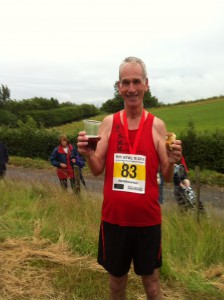 This race was billed as 16th Bewl 15 mile race incorporating 2nd British Masters Athletics Federation Multi-Terrain Championships. The race was voted 25th best race in 2014 by Runners World, so I decided it was one I had to experience despite it being a round trip of 540 miles from home. Pre- race entry was just under 800 runners a record for this race. A chip timing race.

The route is run largely off road on pretty gently undulating hills around Bewl Reservoir. This 15 mile race rests on the border of East Sussex and Kent, which offers runners a combination of beautiful scenery and demanding terrain with rewards at end of free homemade cakes and beer!

Bewl Reservoir holds 31,300 million litres of water and is largest inland water in South East England. It has 12.5 mile round route for cyclists, walkers and runners.

Prior to start of the race, it rained and rained and continued to rain for about 4 hours! ( the first downpour seen in the area for over two weeks). The race started in Wadhurst East Sussex and start line was about 5 mins walk from Race HQ and the course took runners in a clockwork direction around the Reservoir using the footpaths in the area. The race consisted of 10 mile slippery muddy clay paths, 2 miles of fields, 3 miles of roads with steep hills and 3 stiles to climb over making it a memorable race.

I walked/jogged to the start with my wife Margie who had entered the race but due to illness the week before decided not to run but gave me good support. As the race started a lone piper played his bagpipes in the pouring rain. The route took us across farmland for .75 mile to Bewl Water, with part of the path being narrow and very rutted, so we were advised prior to the race not to be too competitive in the early stages. It did not help with the rain which made the clay ground very slippery underfoot form the start of the race and for most of the 10miles of paths!! ( The pre-race notes stated the course is not normally muddy in the summer months)- how wrong they were this year and the majority of runners including myself were wearing road shoes, far from ideal in the conditions prevailing. This added a new slippery dimension to this years race!

The route heads away from the Reservoir after 10 miles where there is a 3 mile section along country lanes and this was the hilly part of the course as the road climbs away from the Reservoir and then returns by a steep downward slope which was very slippery due to the torrential rain. The route then re-joined the Reservoir for a further 2 miles which included the final uphill of .75 mile to the finish along the same muddy rutted slippery path and field which we ran( walked) down at the start. It was hard enough trying to walk up the hill never mind trying to run it!!

I completed the course in 2:26:10 and happy with my time in view of the very slippery muddy conditions-( worse conditions than some of our Sunday Club runs!)

At the finish On a field in the middle of nowhere Wadhurst Brass Band played throughout.  All finishers received a Tee Shirt, Medal, Homemade Cakes, Pint of local brewery- Harvey’s Bright Bitter direct from Oak Barrels and a Goody Bag which consisted of 14 different items.

Overall a well organised race, plenty of water stations including energy drinks, sweets and oranges, excellent marshalling, fantastic scenery and good value for money. Fully justified to be in top 50 races in UK especially when the weather is dry and sun shining.