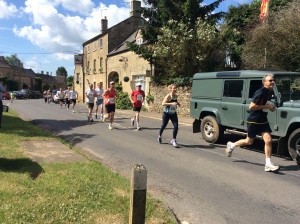 Kingham is situated 7 miles south of Stow-on-the-wold in the Cotswolds. A beautiful village with two village greens surrounded by Cotswold Stone buildings. Kingham was voted England’s favorite village in 2006 by Country Life Magazine, so I had to experience a run through the village. This was the first time I had competed in a 12k race and this year they were celebrating their 40th Anniversary race!

As we arrived at Race HQ the sun was out and it was shaping up to be a hot day and we were not disappointed as temperature eventually reached 23C during the run. (Apparently, last year it rained all morning).

The race started outside the Race HQ at Village Hall at 10.30am and finished on one of the village greens which was decorated with bunting and hose pipe ready to greet the finishers. The course ran anti-clockwise through the quaint village streets, past the village greens and out to the nearest village of Churchill on an undulating course. At this stage, I need to mention that Churchill derived its name from the Church at the top of the Hill with the Church Tower being visible for miles around.Yes, you have guessed, the run takes you all the way up the steep hill to the church, then back to Kingham with a good downhill section through the village in a clockwise direction returning to Churchill for a second lap, then finishing on village green in Kingham after passing the Village Hall for third time.

All finishers received a medal and goody bag and a pleasant drenching from the hose pipe. I must mention that there were only 55 runners and 2 in my age group, however, another race ticked off my list!

This race is ideal for those wanting a small race field which can guarantee a top 100 finishing position in idyllic Cotswold village with good support and plenty of free parking.