Weird circumstances – did some ultras last year to show London Marathon that I didn’t need it after a load of unsuccessful ballot entries, then got GFA for London and UTMB entry for 2016.

Did ok at London but struggled to comfortably change training gear afterwards. Chamonix fantastic town in full carnival mode for the UTMB week – few nice days with family relaxing in heat and enjoyed supporting some of the finishers, knowing that a lot of tough races were taking place – then the work started 6pm 26th. The start was the most emotive I’ve seen – check out Vangelis : Conquest of Paradise (UTMB theme) – people were stood on the start line crying. Police on rooftops and single peace dancer before the start reminded us that France was still in state of emergency – then we were off. 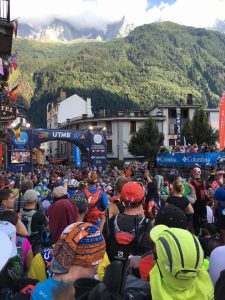 Lovely gentle ups and down to Les Houches, then carouselled up past the ski-lifts, reminding us that we were there to do some climbing. The views were and remained breath-taking. I’d been worried about carrying walking poles (which actually fitted fine into my vest) but very quickly it became clear that they would be out the whole time… Was running too fast especially on downhill then got to St Gervais, where got an idea of the magnitude of the event – there were hundreds of runners and supporters at essentially the first checkpoint and the only event to challenge LDWA catering. I sampled my first of the famous noodle soup here and would have knocked back litres of the stuff by the end. The other bit was recognising that as a mere mortal, a lot of this event would be walking-pole trekking up-hill as opposed to a conventional running event.

I normally worry about two things on ultras – directions (never going to be an issue in this race) and company (not a big talker normally but the miles and hills disappear as you jabber on about anything). Language clearly an issue at UTMB, but didn’t get sustained chat which was a challenge.

Notre-Dame de la Gorge stone fires and Les Contamines gave superb scenery and support, feeding stations and steep ascent. The difficult first night included the summits of Bonhomme, Calcaires and la Seigna, but I felt ok. The dark skies star views were fantastic. First hallucinations began – seeing marshalls where they weren’t, others were worse – some shouting at anyone who would listen for no reason at all! Lots of high mountains up and down including in T-shirts and shorts across snow-fields which was superb. Fantastic view over lakes into dawn from mountains framed by clouds. Steep descent into Italian Courmayeur smashed feet up ready for drop-bags. The run out of town –ahead of schedule – was hot and steep but was impressed by the way Italians were treated like superstars by the locals. 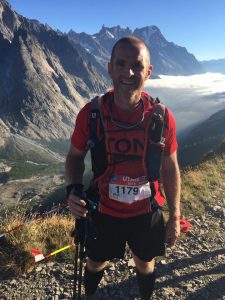 The rest of Italy was just hard – 30 degrees at least. I had become fixated upon getting ahead of the cut-off times and ran too hard down two mountains (the beginnings of over-doing it), which set me up for a slow-cooking up Col de Ferret: able to see in the hot daylight just how steep and far we had to go. Became absolute convert to drinking lots from streams – more on that later. Too many people seemed to be giving up on the Ferret, walking head-down back down the hill and crushing when you think how far people travel to take part. I had been pushing hard for a long time by this point and when tried running downhill found had proper good quad-pain. Sat at check-point and for the first time felt vulnerable around completing, but also began to get confused about check-point times. Had been over-caffeinating and taking too much liquid and sugar; and was at this point that I decided to add brufen to the mix. The quads eased and a good downhill got me to into La Fouly with greater margin. Also now had irritating thirst that couldn’t shift and (wish I took photos) quality bloodshot eyes! A good feed then took off for the Swiss-leg, past the chocolate box chalets and drops from paths that you didn’t want to dwell on. 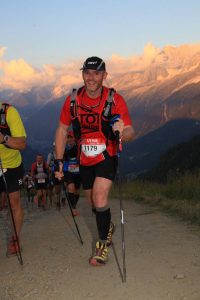 This would be the hardest leg for me. About an hour into it although absolutely clear that I needed to be moving forward, I got the ‘detached’ feeling and lost sight of my next objective. The nutrition/heat/foot care/tiredness combination was checking me out. I focused and followed some French guys for about five miles until I moved ahead into a superb second evening electrical storm and cooling rain. I hadn’t reached the bottom yet but watched others simply lie/fall down and sleep! I staggered up to Champex-Lac where a huge aid station was located. It was a sensory overload. Hadn’t eaten for ages and become worried if able to drink as had been drinking so much. A very kind volunteer steered me towards the medics who did some tests (all ok) and wanted me to sleep for 20 mins to help in their assessment. Sleep? I had timescales to meet! I can’t sleep on command, but was on a sticky wicket – important that I get checked out, but I was in the worst place to present as flaky, as a headshake would have put me out in Switzerland in the middle of the night! Tests were all ok and was able to convince a really nice set of people that although hadn’t slept was fit to continue. Necked some food and drink and got out quick but with a new objective, forget the time – finish…

The rest of the night would be two of the last three last hills. Loads of relentless climbing, hot again and best described as when you’ve had one more than you should have but are trying to act normal. The second hill felt like the first – I was convinced that I’d seen that fir-cone or tree before… I had some conversations – some lucid – others not-so: I spoke to a guy called Dave at one point who was getting married next year in Hawaii and was thinking how to sell doing an ultra whilst there to his wife-to-be… he ran ahead a bit and I continued talking to him. After a while, the Spaniard who was clearly not Dave, gave up correcting me and we shot the breeze about whatever until we went our separate ways…
The final significant checkpoint was at Vallorcine. The bit I didn’t appreciate at the time was my need to change foot-care for these events – my descent to the food-station was woefully slow but my feet were on fire. I’ve thought before how do some people run 100 in the same socks and shoes and I’m ready to change both after 30. I left the CP very focused upon time – I had nine hours to finish (do-able) but I had to be at the top of La Tete aux Vents quicker (but not as quick as I thought) to avoid an earlier cut-off. The ascent was my opportunity and I pounded-up the last mountain, sparking a comedy race within a race where I think people thought I was going for places whereas in fact I was giving myself breathing space on the descent. Went most of way up with lovely guy called Craig (I’m sure but forgive me if mistaken) who was there for third time having lost his mother whilst taking part in last years’ event and was on course for a PB this year.
It would have taken a minute to have taken a picture from the Col prior to the big run-in but I was too focused on getting done.
Any other time the downhill would have been an enjoyable sprint – I shuffled for about two and a half hours, steering the odd runner away from the edge as they staggered down more than half asleep, until I hit road and could actually jog again. Did that, got a huge gilet as a reward (no medals at UTMB), my can of Kronenbourg and shuffled off to recovery… job done. 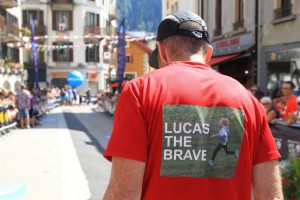 Afterwards – couldn’t move the day after, then legs/muscles came back quite quickly, blisters were a problem and perversely right rotator-cuff pull meant two days not using right arm! Day two was stomach cramps heralding four days diarrhoea got me a little weak and under 12-stone for first time since kid! Loved the spring water – challenge them when they tell you it’s ‘potable’! 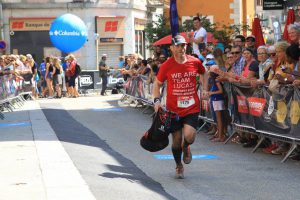 Was privilege to be able to run for Lucas’ Legacy charity and am humbled and grateful to those who have pledged. Most are in now, but something in the region of £1300 has been donated – thanks and well done.
It’s a week since the finish, across the last few days I never wanted to run again at all, but am apparently eligible to be able to apply for next year. Not sure how reads, but if you want to run like you are running on the roof of the world, with the very best of views with runners from every corner of the globe, the pleasure is very much worth the pain. The PTL appears the actual toughest (290km), but the festival includes also the OCC (55km), CCC (101km) and TDS (119km) – have a look and review your bucket-list, cheers.